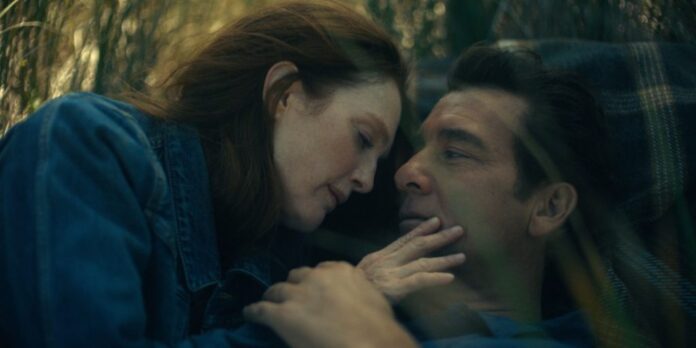 If there’s a Stephen King adaptation out there that hasn’t been adapted into a TV show or movie yet, trust that someone’s already got their eye on it. The author’s works are more popular around Hollywood than ever, and Apple has amassed some impressive talent for their upcoming drama series Lisey’s Story, with the first looks arriving ahead of its debut in June.

Julianne Moore, Clive Owen, Dane DeHaan, Joan Allen, Jennifer Jason Leigh, and Ron Cephas Jones are all seen in these first images from Lisey’s Story. The miniseries centers on the wife of a famous author, who experiences a series of unsettling events two years after his death that jog the repressed memories she had about the man he really was.

Along with the extraordinary acting talent, the series is directed by Pablo Larrain, best known for his Jackie biopic, as well as films such as The Club, No, and the upcoming Princess Diana film Spencer. JJ Abrams is producing through his Bad Robot label, as well.

SYNOPSIS: “Lisey’s Story” is a deeply personal, pensive thriller that follows Lisey Landon (played by Julianne Moore) two years after the death of her husband, famous novelist Scott Landon (played by Clive Owen). A series of unsettling events causes Lisey to face memories of her marriage to Scott that she has deliberately blocked out of her mind.