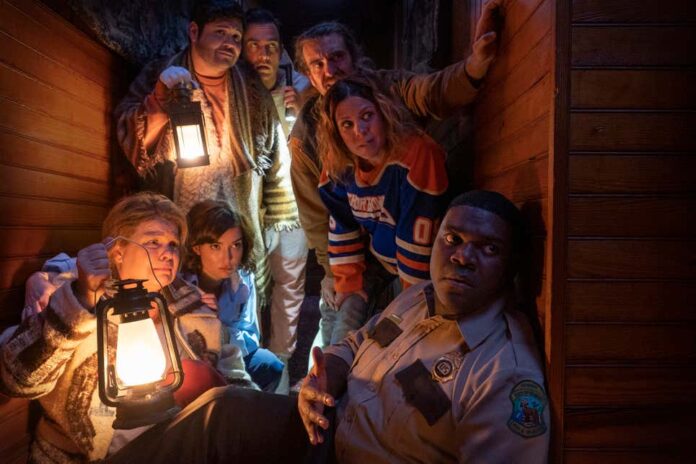 Don’t be shocked when “UbiSoft” is credited in the opening to Josh Ruben’s horror-comedy Werewolves Within. Yes, the film is based on a popular VR game but you don’t need to have played it to understand a thing. In fact, the premise is cozily familiar to any genre fan: a small town, a newcomer, weird citizens, and a slew of murders in which everybody is a suspect. But Ruben, who previously wrote and directed the novel, if somewhat underwhelming Scare Me, brings the funny in a whodunnit that has more in common with Knives Out than The Wolfman.

It’s hard to imagine a more affable, lovable duo than Sam Richardson (Veep, The Tomorrow War) and Milana Vayntrub (those AT&T commercials you inexplicably like), and fortunately we get plenty of them both. Richardson plays naive forest ranger Finn, who arrives into the snow-covered town of Beaverfield 29.5 days after a mysterious murder committed with animalistic fury.  What he finds are a bunch of Fargo-esque locals with more quirks than sense. Vayntrub is the chatty, acerbic but also welcoming mail carrier Cecily, who immediately takes a shine to the newcomer. Not so much the rest of the locals, with distrust of outsiders permeating in this batch of misfits.

Not that the clueless Finn recognizes any of this. He doesn’t know about the murder or the potential oil pipeline that has divided the townsfolk into warring factions. Some want it for the money it can bring them, and on the other are those who either don’t give a crap or want to protect the forest environment.  There’s the beleaguered innkeeper (Catherine Curtin) who has been a wreck since her husband left; the cordial pair of right-wingers (Michaela Watkins and Michael Chernus) who look for any reason to blame ANTIFA; the wealthy gay couple (Cheyenne Jackson and Harvey Guillén) recently-arrived in town; a crusading environmentalist (Rebecca Henderson); the shady oil exec trying to bully his way into property rights (Wayne Duvall), and a pair of weirdo rednecks (George Basil and Sarah Burns) as stupid as they are violent. On the outskirts is a heavily-armed survivalist (Glenn Fleschler) who everyone fears, and for good reason since he has no qualms about threatening to shoot them all.

While Ruben sticks to directing this time, he’s joined by humorist Mishna Wolff on the screenplay and it shows. Wolff’s lean script (in contrast to Ruben’s unwieldy, overlong Scare Me) dabbles in social commentary and picks apart the notions of small-town charm. She’s particularly adept with the female characters, notably Vintraub’s Cecily, who always has a snarky remark to battle back against the toxic males she’s surrounded by. When a snowstorm traps the group inside the inn, tensions boil, and the body count starts to rise with everyone playing the red herring at one point or another. The question isn’t so much who is the killer, but whether it’s actually a lycanthrope (that word becomes a fun ongoing gag) terrorizing them.

Richardson’s “aw shucks, Heaven to Betsy” do-gooder act gels seamlessly with Vayntrub, who has a brief dance scene that might be the most charming thing I’ve seen all year. With so many terrific comedic actors in one place, Werewolves Within can’t help but be funny, feeling at times like they’re free to go off-the-cuff than from a structured script. That sense of freedom helps because these performers are well aware of the kind of film they’re in, and take pleasure in exaggerating the genre’s tropes. Not every gag works, and sometimes the whole werewolf aspect sinks too far into the background with so many characters vying for attention.  While it lacks the gore and gruesomeness the title suggests, Werewolves Within‘s humor has the teeth to make up for it.

Werewolves Within opens in select theaters on June 25th, then expands to VOD on July 2nd.