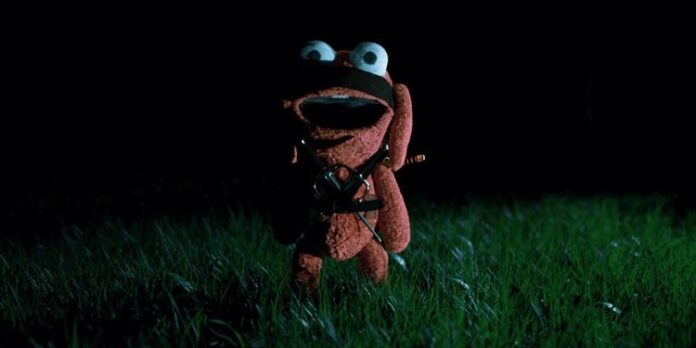 While Pixar might have us believing discarded toys are content to sit idle in a closet, or boxed up and given to some neighbor kid, that’s just not realistic, is it? I mean, we all know that if toys were actually alive they’d be vicious murderers. Horror movies have taught us that, too! And in the case of Benny Loves You, one toy goes to deadly lengths when his owner dares to throw him out.

Written, directed and starring Karl Holt, the film centers on Jack, who receives the Benny toy as a kid and they are inseparable. Jump forward to adulthood and Jack is still dealing with a past tragedy, and decides he needs to make some changes. One of those is to finally toss out his childish possessions, including Benny. However, the doll simply ain’t havin’ that shit and will kill anything in his path to be with Jack forever.

I love this trailer. Benny doesn’t look obviously evil like Chucky, he’s actually pretty cute…even when he’s holding a knife or a pair of scissors. That makes him extra menacing in my book, and I love that scene of him in the office surrounded by idiots who don’t realize they’re laughing at a murder doll.

Benny Loves You hits select theaters on May 7th, followed by VOD on May 11th.

After the accidental death of his parents, Jack’s comfortable lifestyle comes to an end and he must sell his family home. Desperate to improve his life, Jack throws out his childhood belongings including his beloved plush, Benny. It’s a move that has disastrous consequences when Benny springs to life with deadly intentions!