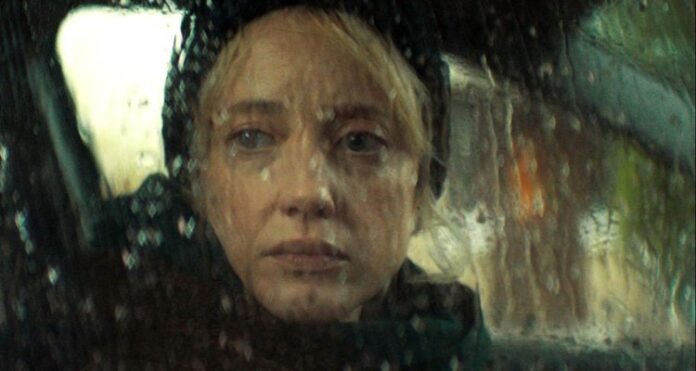 I hate to bring up WandaVision in a review of a small-ish SXSW drama like Here Before, but there is at least one parallel in that they both deal rather heavily in the handling of grief. You won’t find any superpowers or sitcom tropes in Stacey Gregg’s film, but you will get the always-great Andrea Riseborough, who convincingly portrays a mother who believes her dead daughter has returned to this world and is living next door.

It sounds a little crazy, and one of the notable things about Here Before is that Gregg, who also wrote the script, acknowledges that. She doesn’t belittle the viewer’s intelligence. The film centers on Laura (Riseborough) and her husband Brendon (Martin McCann) as they’re still reeling from the death of their daughter Josie in a car accident. They now have a son, and seem to have settled into normalcy, when new neighbors move in next door, including a precocious little girl, Megan (Niamh Dornan), who Laura instantly takes a liking to. Too much of a liking, actually. She reminds her of Josie, and it’s easy to see why. Megan seems to know things about Josie. Megan continuously says and does everything that recalls to mind Laura’s lost little girl, and soon she’s overstepping her bounds, taking the neighbor child on drives, spending too much time, and studying up on reincarnation.

While a bit slow to get moving, Here Before hints that something supernatural could be afoot. We’re trained by years of horror movies to see that first whenever things get creepy and unexplainable. Gregg uses that to her advantage, buildings towards an inevitable confrontation between Laura and Megan’s parents, with tensions rising out of a desire to protect the child rather than from a place of hate. At its core, there’s a mother’s desperate need to believe her loved one is still out there, which combined with a sense of faith can lead one to believe what seems impossible. This doesn’t make Laura a bad person; a mother’s love is an enduring, unbreakable thing and Gregg always comes at her characters with that in mind. So does Riseborough, who takes a role that could be histrionic and over-the-top and delivers a wonderfully understated, nuanced exploration of trauma’s long-lasting effects on a grieving parent.