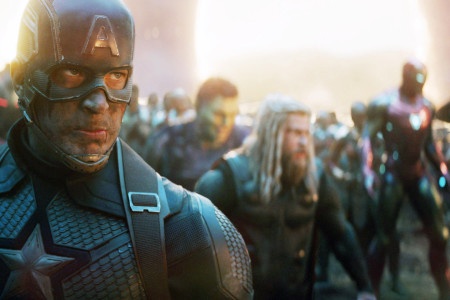 When news began to circulate that Chris Evans was coming back as Captain America in future Marvel projects, fans were excited…but Evans wasn’t playing that game.

Right. Well, it seems it was news to pretty much everybody at Marvel Studios, including the guy who would know better than anybody: Kevin Feige. Speaking with EW, Feige shot down rumors of Evans’ return…

“I rarely answer no to anything anymore because things are always surprising me with what happens, but that rumor, I think, was dispelled rather quickly by the man himself,” Feige said.

Honestly, that’s not the strongest denial in the world, but about as strong as it gets from Feige. As for the others who might have some idea what’s up, Falcon and the Winter Soldier stars Anthony Mackie and Sebastian Stan, whose characters are the most likely to wield Cap’s shield next, are dubious of Evans’ future in the MCU…

Mackie said, “Marvel’s so secretive, and it’s so ridiculous about what we know and what we don’t know,” he adds. “I have no idea. The dude at the dock selling me shrimp knows more about what’s going on with Marvel than I do.”

Stan added, “Anything is possible, right? I saw he tweeted something about it. So, I don’t know. I feel like usually he knows what to say in those things, so I didn’t know what to make of it. And I truly don’t have any intel on that. I feel like you can’t ever think of the words ‘Captain America’ without thinking about Chris Evans. He’s done such an amazing job with it, and I feel like he’s always going to have this presence. And he has a presence in our show.”

There’s been speculation Old Man Steve could show up in Falcon and the Winter Soldier, a series that is consumed with Captain America’s legacy. If he’s going to be anywhere, that’s the place.