Remember when putting Joss Whedon in charge of a Batgirl movie seemed like a really good idea? Yeah, a lot has changed in a few years. Whedon delivered one of the biggest superhero flops in Justice League, then allegations about his abusive treatment of actors began to surface and he was removed from the film. Birds of Prey writer Christina Hodson was brought on to revive the project, but Batgirl has sat languishing ever since.

Well, Batgirl is not dead. The film appeared as part of Warner Bros.’ upcoming DC slate during today’s AT&T’s Analyst & Investor Day 2021. While it’s just a grid of projects, it at least means the movie is still in development. 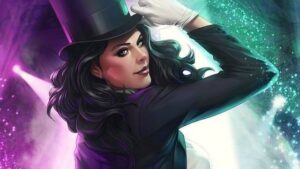 Also appearing on the grid is the Zatanna film that has been rumored about since 2018.

I don’t believe these projects would be revealed in this way if news on them was too far off. It’s possible we’re hearing something soon.