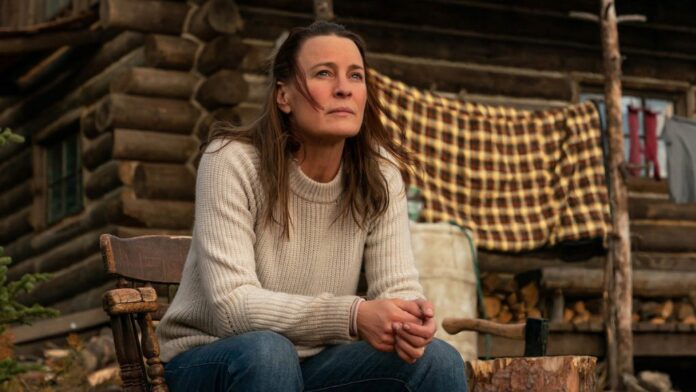 After helming multiple episodes of Netflix’s House of Cards, Robin Wright makes her proper feature directing debut with Land. The simple, no-fuss drama finds Wright also in front of the camera as Edee, a grief-stricken woman who escapes to the hills of Wyoming to deal with her pain in isolation. It’s the kind of quiet, well-observed role that Wright can easily knock out of the park, and while the film says little that’s new about coping with tragedy, its heartfelt compassion for those in pain remains affecting.

Working from an economical screenplay by Jesse Chatham and Erin Digman, Wright offers a similarly no-frills production. It would be easy to see someone like Clint Eastwood directing a film of this simple scope, choosing to put emphasis on character than elaborate, unnecessary flourishes. Within moments we are introduced to Wright’s Edee and the profound loss that has sent her scurrying from the city to an isolated mountain cabin. Escorted up the trail by a local guide, she all but gives the keys to her vehicle to him, despite his warnings that this is a bad move. But Edee clearly has no intention of venturing down into civilization. That’s the entire reason she’s up there, to get away from people.

“It’s really difficult to be around people, because they just want me to be better,” she says.

The problem, that Edee didn’t count on, is that she’s not exactly queen of the survivalists. She’s unprepared for the cabin’s lack of electricity, she nearly freezes to death during a winter storm, and nearly starves without any food that can be easily prepared. The animal noises are terrifying, and water has to be dragged up from the river constantly. A bear attacks at a most inopportune moment, destroying everything. It’s all like the setup to some indie horror movie about a person’s psychological unraveling, prayed upon by their own loneliness and misery, with Mother Nature laughing maniacally in the background.

But this is not that movie, and it isn’t long before Edee meets, or better put, is rescued, by Miguel (Demian Bichir), a patient, helpful man with an easy smile and willingness to use. More importantly, he knows how to survive out there, and he comes armed with vintage playlists and cups of Ramen noodles. He teaches Edee how to handle herself if she’s going to be out there alone, and through their tentative friendship, she begins to see life as worth living again.

It’s not a knock against Bichir, whose Oscar-nominated cred speaks for itself, but Land is a more interesting movie without him. The attraction here is in Edee and her motivation, whether it’s to learn to survive…or not (its suggested this is her suicide plan), and how she comes to decide on a path forward while in an unfamiliar surrounding. The first half of Land hooks us in, but as Edee begins to rebound with Miguel’s help, it treads on familiar ground and adds little.

That’s not to say Land suddenly becomes a bad movie because of their companionship. There’s genuine tenderness in the helping hand he provides, and the healing-through-nature guidance he offers that is like a soothing balm. “You were in my path”, he answers when asked why he is helping her at all. Edee is not good with people in the least. She feels she is undeserving of his kindness, but his answer, one that can be taken both literally and spiritually, speaks volumes.  He never really feels like more than a plot device, however, a means to a revelatory end for Edee that comes too easily.

Much of Land unfolds without a word of dialogue, including flashbacks alluding to the husband son Edee tragically lost. Cinematographer Bobby Bukowski carries much of the emotional weight, depicting the enormity, beauty, and danger of the wild. But there’s also hope in this brutal landscape Edee has chosen. In a place like this, all must fight to survive, hour by hour, day by day. While it may seem the perfect spot to die in solitude, there’s a greater chance it inspires a desire to be alive. Wright proves a capable, unshowy filmmaker who takes on difficult topics with the directness that has driven her acting career. There’s room for Wright to grow, and Land shows promise that she’ll do exactly that.