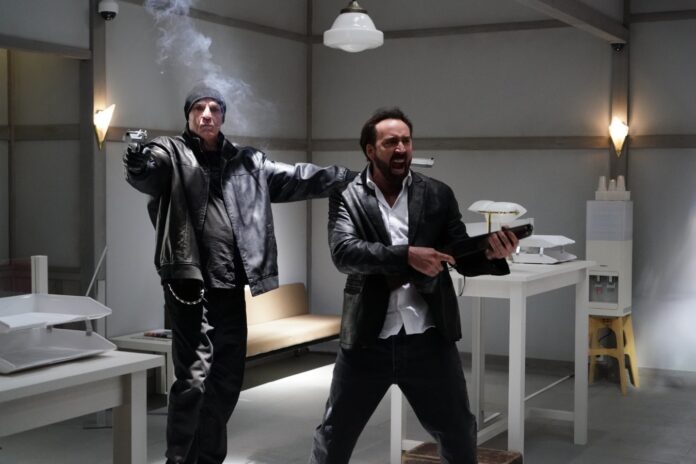 How is it that Nicolas Cage, that wild and crazy guy, hasn’t teamed up with Japanese lunatic auteur Sion Sono before? Perhaps it was just being on completely different continents, or the fact that neither has worked on a movie that is predominantly in the other’s language. On a cinematic level, Prisoners of the Ghostland’s chop-socky hybrid of Mad Max-style dystopia meets Kill Bill-esque samurai/western action proves Cage and Sono are kindred spirits, even if the whole thing doesn’t always work on a wavelength sober minds will enjoy.

Sono is a legendary Japanese filmmaker whose extremism in films such as his 4-hour upskirt opus Love Exposure and yakuza rap opera Tokyo Tribe have made him a cult favorite of the indie circuit. Teaming up with Cage, a sudden Sundance darling thanks to 2018’s Mandy, Sono has found the perfect American actor to indulge with. Prisoners of the Ghostland is gonzo American action meets bonkers Japanese martial arts cinema, and the results are predictably a muddled, if entertaining, goop of randomness.

Coming up with a way to describe the plot without the ingestion of hallucinogens isn’t an easy task. In the barest sense, Cage plays Hero, who in the beginning is anything but. A rugged, gun-toting desperado who along with his cohort Psycho (Nick Cassavetes, yes the guy who directed The Notebook) plows into rainbow-colored bank screaming “Banzai!!”. A massacre ensues, Hero is captured, and forced by the white-suit-wearing Governor (Bill Moseley), a man his constituents call “the greatest and most powerful Clock”, to find his wayward granddaughter Bernice, who has escaped from his brothel. A brothel made up of giggling geishas, one of whom quickly sketches Hero on a notepad, sure to capture the likeness of his balls. Hero is kept in check by an exploding leather suit, with two bombs placed oh so perfectly against said balls. If Hero fucks up, or gets too excited, well…KABOOM.

You already know there will be a KABOOM. 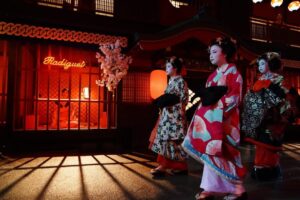 The titular “ghostland” is a radiated wasteland, with infected citizens, zombies, cowboys, and ninjas. Each town has something new and intoxicating to offer visually, like walking through a fucked up version of Epcot’s World Showcase. Pink cherry blossom petals drift on one corner of Samurai Town, only to round the corner into old Western style saloon full off cowpokes. The passage of time weighs heavily, quite literally, as the Governor has some of his oppressed people holding back the hands of a giant clock. In flashback told through flipping pages like manga, we see the event that changed everything. Samurai warriors clang swords, Jim Croce’s “Time in a Bottle” casts a serene mood, and a Cage’s Hero is so cool someone literally remarks “He’s so cool!” as the protagonist motors away on his bike.

The whole thing is quite a scene, but one presented without the context or logic to keep us interested beyond wanting to know how far Sono’s madness will go. The answer? Pretty damn far, especially with Cage willing to go to some of his strangest places. The name “Hero” is appropriate; because that’s all we really get to know about him. Who needs more as he fights through ninjas and mutants alike, complete with snap-on weapons and a sneer that seems glued to his face. Cage is having a blast, and his fans will come to love Sono for working with his star’s manic energy.  Too bad there isn’t more for Boutella, however. A gifted physical actress, she and Cage would’ve made one Hell of a kick-ass pair if given the time.

Don’t be at all surprised if Prisoners of the Ghostland becomes a Midnight favorite, despite its lack of narrative thrust and surprisingly tame finale. This won’t be the last we see of this infernal union of Cage and Sono. Their first movie together gives us Nicolas Cage in a testicle bomb suit. What in all that’s holy might they do to top it?

‘The Unbearable Weight Of Massive Talent’ Trailer: Nic Cage Takes On The Role Of A Lifetime…Playing Himself