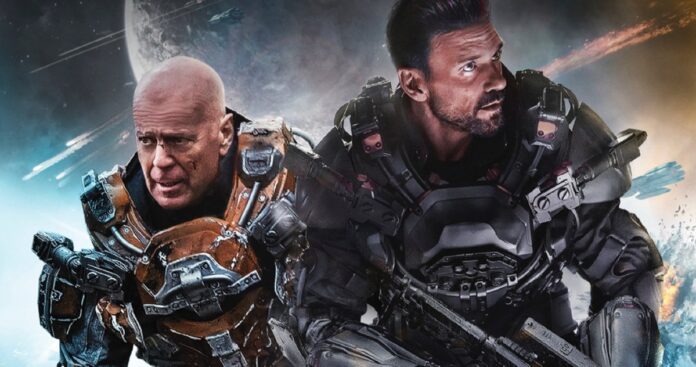 I’m convinced if Bruce Willis and Frank Grillo stopped making movies the entire industry would collapse. Surely, the 50 low-budget action flicks they make every year are keeping Hollywood afloat? Well, here’s another one: Cosmic Sin. Haven’t heard of it?  I had forgotten about it until 10 minutes ago but I want to see it bad now because Willis and Grillo fight space aliens. How could this possibly be bad?

The title Cosmic Sin comes from the squad put together by General Eron Ryle (Grillo) to stop an extraterrestrial threat to all of humanity. Willis plays James Ford, a washed-up general recruited to help end the interstellar war in the year 2524.

Behind the camera is Edward Drake, having also co-written the script with Corey Large. The duo worked with Willis just last year on Breach.

Cosmic Sin opens in theaters and digital on March 12th.

Bruce Willis and Frank Grillo star in the new epic sci-fi adventure set in the year 2524, four hundred years after humans started colonizing the outer planets. Retired Military General James Ford (Willis) is called back into service after soldiers on a remote planet are attacked by a hostile alien fleet. The threat against the human race escalates into an inevitable interstellar war. General Ford teams up with General Eron Ryle (Grillo) and a team of elite soldiers in a race to stop the imminent attack before it is too late. #CosmicSin