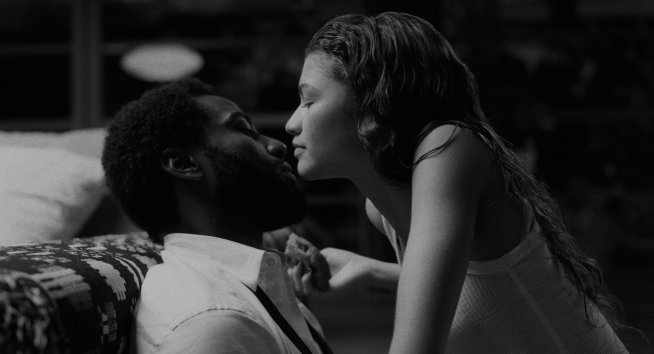 Words can hit harder than any fist. In Sam Levinson’s Malcolm & Marie, a couple, played by Tenet star John David Washington and recent Emmy winner Zendaya, manipulate and abusive one another for an hour and forty minutes. There’s no violence, nor threats of it. Just words. Painful, hurtful words that cut deep to the bone. Watching these two people fight is as exhausting as it sounds, but there’s exhilaration in the conversation, the passion, and performances by two actors at the top of their game.

One of the first major productions shot during quarantine, but free of the “let’s examine the moment” phoniness of other films, Malcolm & Marie looks gorgeous, captured in sultry black and white like a romantic drama of Hollywood’s golden age. Add to that th stunning presence of Washington and Zendaya, who play the titular couple on what should be the greatest night of their lives. In fact, the hot-shot Malcolm tells us exactly this multiple times. They’ve just returned to their glass-paneled home in the Carmel Valley late from his new film, a rapturously-received drama about a woman’s recovery from drug addiction. It’s also Malcolm’s directorial debut, and he’s on cloud 9. Unfortunately, Marie ain’t feelin’ it. In her shimmering dress, she quietly makes him a box of Kraft macaroni and cheese, simmering just as hot as the water boiling on the stove.

Malcolm forgot to thank her in his speech. It could be just an oversight, which he argues, but those words can barely get out of his mouth before they’re shot down. He remembered everybody else but forgot HER, the one who has stood by him, supported him, and as a recovering addict also served as his inspiration. During a moment when everybody is kissing Malcolm’s ass, Marie is not about to listen to his bullshit. Well, that’s the intention, I guess. She’ll listen to quite a lot of it, actually.

Not being thanked is one thing, but it’s just the catalyst for a flood of resentment and long-held secrets to emerge. Nobody knows how to hurt you worse than the ones you love. When we open the door to love, we’re trusting the other person with the weapons to kill us emotionally, Both Malcolm and Marie make judicious use of this. She attacks his craft and gigantic ego, he attacks her history of addiction, relapse, and self-harm. During this knockdown drag-out brawl, the various insecurities they each hold also reveal themselves. Both are fragile people, in their own way. Malcolm hides it behind a mask of bravado, while Marie has come to accept it, after a fashion. She at least takes some pride in being a person who has survived being broken, although Malcolm tears her apart for that, too.

The argument is fascinating to watch for multiple reasons. First and foremost, Zendaya is simply incredible, captivating in look and substance so that she’s impossible to look away from. She says more in a simple facial expression than most can with their entire bodies and a page of dialogue. Watch her wither away as Malcolm fills her head with sordid stories of his romantic past, or the slight satisfied smile when she delivers a point he can’t lie his way out of. She’s tremendous, and it’s something else to see her, and Washington as well, capturing this moment when they are both at their heightened best. We know Washington is good because, as Malcolm’s cruelty and narcissim are his only constants, we just want Marie to kick him in the nuts and walk out.

In the midst of this firefight, other topics emerge that occasionally suck the air out of the room. Levinson, a ballsy filmmaker who created the HBO series Euphoria that Zendaya regularly shines in, as well as the brazen Assassination Nation, can’t deny his own indulgent impulses at times. Malcolm loves it that the guilt-stricken white liberal film critics from Indiewire and LA Times think him a revelation, his movie a masterpiece, but rages at their insistence on framing all black stories through a political or racial lens. Malcolm drowns in this topic during an overlong monologue that feels like Levinson airing his own grievances or perhaps deflecting criticism that will inevitably come Malcolm & Marie‘s way. Whichever his motivation, the only thing that matters is it feels inorganic to a story that, for the most part, feels all too much like real self-absorbed people in love who fight, make up, and fight some more, a toxic cycle they know can only end badly.