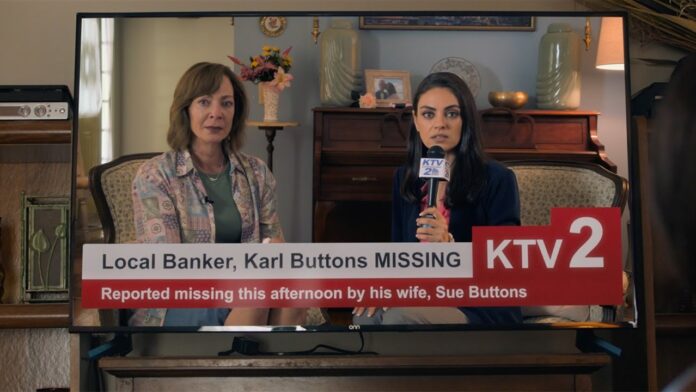 There are a lot of really funny women in the new comedy Breaking News in Yuba County. Led by Allison Janney, the film also stars Mila Kunis, Regina Hall, Awkwafina, Bridget Everett, Samira Wiley, Wanda Sykes, and Juliette Lewis. Behind the camera is Tate Taylor, whose previous films The Help, The Girl On the Train, and Ava show him to be a director attracted to stories about women pushed to the edge.

A little bit like the comedy version of Gone Girl, Breaking News in Yuba County stars Janney as an unappreciated housewife who gets her 15 minutes of fame when she reports her husband missing after a violent struggle with him turns fatal. To keep up this newfound celebrity, she has to tell bigger and bigger lies, attracting the attention of some unsavory types who want to know what’s really going on.

Breaking News in Yuba County opens in theaters and VOD on February 12th.

After her husband goes missing, Sue Buttons (Allison Janney), an underappreciated suburban wife, gets a taste of being a local celebrity as she embarks on a city-wide search in Yuba County to find him. In an effort to prolong her newfound fame, she stumbles into hilarious hijinks as her world turns upside down, dodging a wanna-be mobster (Awkwafina), a relentless local policewoman (Regina Hall), her half-sister (Mila Kunis) a local news reporter desperate for a story, and her husband’s dead-beat brother (Jimmi Simpson), who all set out to uncover the truth behind the disappearance. Directed by Tate Taylor and written by Amanda Idoko, Breaking News in Yuba County is a dark and twisted comedy that explores the outrageous lengths some will go to in order to garner some much-desired attention.