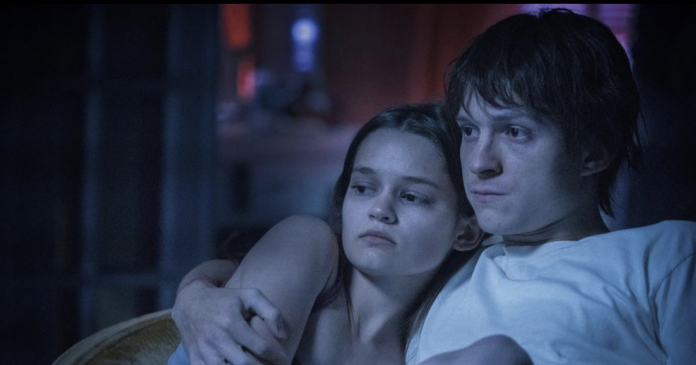 For now, Tom Holland is known primarily for playing Peter Parker/Spider-Man in the Marvel movies, but he’s got a lot of years to go in his career. When all is said and done, it’ll be the roles he takes outside of superheroes that define him, and so far Holland has shown a willingness to push himself in some new directions. Such is the case with Cherry, a crime drama that reunites him with Avengers directors the Russo Brothers in a story that captures the depth of the opioid crisis in their home state of Ohio.

Cherry is based on the true story of Nico Walker, a college dropout-turned-Army medic who returns home with PTSD and an opioid addiction that he feeds by robbing banks. The film is based on Walker’s bestselling 2018 novel (which he wrote in prison for those robberies), adapted by Angela Russo-Otstot and Jessica Goldberg.

Also in the cast are Ciara Bravo, Jack Reynor, Michael Rispoli, Jeff Wahlberg, Forrest Goodluck, and Michael Gandolfini. Cherry opens in theaters on February 26th before moving exclusively to Apple TV+ on March 12th. It does sorta feel that we’re seeing A LOT of this movie and hopefully this is the last before release.

“Cherry” follows the wild journey of a disenfranchised young man from Ohio who meets the love of his life, only to risk losing her through a series of bad decisions and challenging life circumstances. Inspired by the best-selling novel of the same name, “Cherry” features Tom Holland in the title role as an unhinged character who drifts from dropping out of college to serving in Iraq as an Army medic and is only anchored by his one true love, Emily (Ciara Bravo). When Cherry returns home a war hero, he battles the demons of undiagnosed PTSD and spirals into drug addiction, surrounding himself with a menagerie of depraved misfits. Draining his finances, Cherry turns to bank robbing to fund his addiction, shattering his relationship with Emily along the way. Brought to the screen in bold, gritty fashion by visionary directors Anthony and Joe Russo, “Cherry” is a darkly humorous, unflinching coming-of-age story of a man on a universal quest for purpose and human connection.