Um, oops? Marvel’s generally pretty good about the announcements they make regarding their upcoming films. But this time their officer Marvel India Twitter account may have made a mistake regarding Blade, starring Mahershala Ali.

In a quickly-deleted tweet, Marvel India placed Blade among a group of upcoming releases, set for October 7th 2022. The rest of the dates for the other films, such a Doctor Strange in the Multiverse of Madness, The Marvels, Thor: Love & Thunder, etc., are on point. So it stands to reason Blade is, too, right? Nothing has been confirmed, however, and like I said, the tweet was pulled. It all might be a miscommunication, or somebody at Marvel India jumped the gun. That’s what I think happened. 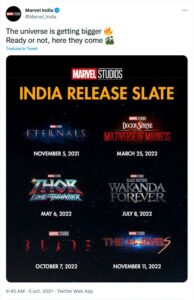 Oscar winner Mahershala Ali was announced to star as Blade a couple of years ago, but there was very little movement on it until recently when Mogul Mowgli director Bassam Tariq came aboard. There remains hope that the original Blade, Wesley Snipes, will have a role somehow.