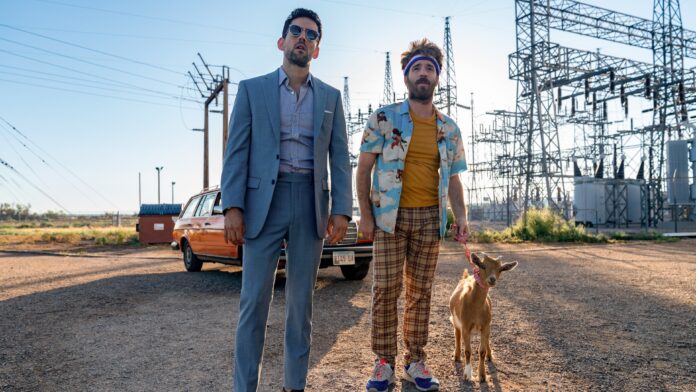 Renato (Ian Inigo) was having the time of his life growing up in Mexico in the mid-90s in Half Brothers. He had a great relationship with his father Flavio (Juan Pablo Espinosa) – a jokester who loved riddles. The two of them did everything together, including having their own special whistle. They both had an affinity for airplanes and flying the remote-control airplane across the town was a common occurrence. Unfortunately, economic turmoil hit their town and Flavio had to go to the United States to earn money for the family. That was 26 years ago, and the last time Renato saw his father.

Renato (Luis Gerardo Mendez) has grown up to be a successful aviation executive. He took his love of airplanes and turned it into a career. That playful, joyous, young boy is long gone though. Renato has turned into an unfriendly and unlikeable jackass. He is days away from marrying Pamela (Pia Watson) who has a son of her own named Emilio (Mike A. Salazar). Pamela wants Renato to have a relationship with Emilio, but Renato can’t seem to let down his walls. Then Katherine (Ashley Poole) calls and everything changes. 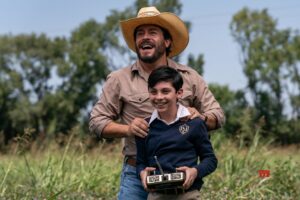 Katherine is Flavio’s American wife. She tells Renato that Flavio is on his death bed and asked to see him. Renato reluctantly obliges, aka is forced to go by Pamela. He heads to America, which he despises for taking away his father, to see him one last time. At the hospital Renato shockingly learns he has a…half-brother named Asher (Connor Del Rio). The two of them could not be more different. Renato is rigid and no nonsense while Asher is aimlessly floating through life. Flavio sends the two of them off on a road trip that he claims will explain everything to both of them. 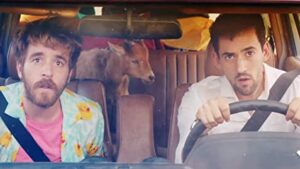 Half Brothers manages to successfully toe the line of absurd comedy and heartfelt drama. There are numerous slapstick moments that, while stupid, are flat out funny. On the other hand, you have genuinely moving scenes that pull at the heart strings. Screenplay writers Jason Shuman and Eduardo Cisneros do a wonderful job balancing this for the entirety of Half Brothers. They manage to add warm moments and when things get too serious, have a quick joke that lands perfectly. Shuman and Cisneros have crafted a smart script with a mix of subtle humor and in your face gags. They repeat jokes perfectly, in a way that is reminiscent of Arrested Development, making them funnier each time. The script is also incredibly topical, only adding to the hilarity. This balance makes Half Brothers the perfect date film, there is something for everyone.

Music plays a big role in Half Brothers and Director Luke Greenfield highlights it throughout the film. Greenfield goes as far as using music to not only frame a shot but be the central joke within scenes. On top of the music, he inserts just enough interesting shots and camera angles to keep things fresh. Greenfield uses flashbacks to further the narrative and provide a glimpse of Flavio’s journey. The main actors in the film give solid performances. From Mendez’s uptight Renato to Del Rio’s aloof Asher, all are believable, and their chemistry is strong. Half Brothers reminded me of a poor man’s mashup of The Hangover and Due Date. While Half Brothers may not be revolutionary, it is very much an enjoyable watch and perfect for the holiday season.

Attend A Free Virtual Screening Of ‘Half Brothers’

Worlds Collide In The Heartfelt Trailer for ‘Half Brothers’