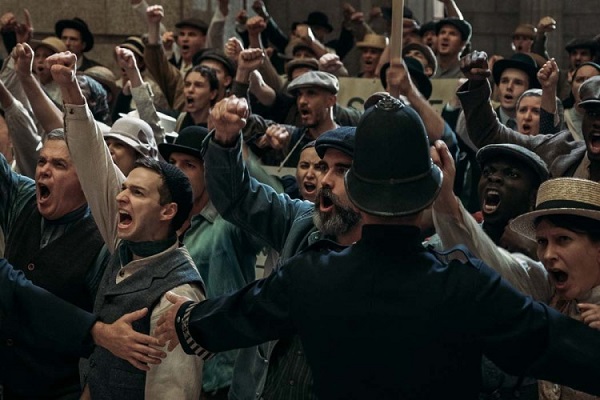 Nowadays we take many of our labor laws for granted. We work our 9-5, receive our guaranteed pay, and think nothing of it. That was not always the case and, in the past, there was no guarantee and people were just simply happy to have a job and endured whatever was thrown at them for an honest paycheck. While we here in the States have had our own labor movement, the film Stand! Gives a history lesson of the Winnipeg General Strike of 1919 that happened in Canada. For six weeks, more than 30,000 Canadian workers (mostly immigrants) participated in a strike for better pay and working conditions. While the strike ended with the strikers being beaten, defeated, and thrown in jail, it led to many labor changes that helped make labor laws much more favorable for workers in Canada and are now considered a great legacy of Canada’s organized labor. Stand! is based on the 2005 Canadian musical Strike! which commemorates the general strike. While the play (and therefore the film) is based on a fictitious story within the strike, but many of the details remained. The play was very popular and was eventually adapted into a feature-length film.

The main character in Stand! is Ukrainian immigrants Stefan (Marshall Williams of Glee fame) and his father Mike (Gregg Henry) who come to Canada looking for a better life, but soon enough they see just how hard life is for a working immigrant. For one, they don’t get paid that much, but because of that, they also get animosity from Canadians looking for work that “get their jobs taken away” from immigrants (sound familiar?). At the same time, Stefan meets Rebecca (Laura Slade Wiggins). Stefan and Rebecca become attracted to each other, which creates a weird West Side Story relationship between a Catholic man and a Jewish woman that occupies much of the film in the background.

In the foreground though, there is a labor uprising happening. Many different groups fed up with how things are going (union organizers, African American maids, factory workers, and women who work in the garment industry) have decided to organize a general labor strike to impact change. Of course, not everyone is on board. Even Stefan’s father Mike thinks a strike is a bad idea as it’ll rock the boat. But the leader of the black maids Emma is adamant that there should be action and sacrifice if need be in order to make some changes. Of course, the government isn’t exactly happy with this. Many soldiers who just came back from the war are already resentful that their former enemies are now immigrants looking for work, and lead soldier Davey (Ryan Ash) is rather abusive against many strikers. One lawyer A.J. Anderson (Paul Essiembre) leads the charge to squash the strike, even if he has to go through violent methods to get it done, even if it pisses off his sympathetic wife. Of course, there are some soldiers, like Indigenous soldier Gabriel (Gabriel Daniels), who has a conscience about what they are doing.

Oh, and Stand! is a musical.

As I am a sucker for musicals, I gotta admit that many of the musical numbers are very good. Newcomer Lisa Bell, who plays black maid leader Emma delivers the best solo performances as not only does she have the pipes, but delivers raw passion and emotion when singing her songs.

However, some of the acting feels more like it’s for a play versus an actual film. This partly may be either the actors’ fault, or the director Robert Adetuyi (Stomp the Yard, You Got Served: Beat the World) as at times many of them felt stiff in their performances. Unfortunately, the romance also feels a little stuff, all the way to their passionless “Broadway kisses.” While the love story might have been a part of the play, there was something missing in bringing it to the big screen, when much of the details surrounding the strike were more interesting.

That said, Stand! is still an intriguing and fun time if you like musicals as the numbers are interesting. It also does a great job of informing the audience with a little bit of Canadian history, which also works for an American audience as we also had our own somewhat similar labor movement and continues to show that workers have fought and sacrificed for many of the wonderful things we all have in a functioning society.