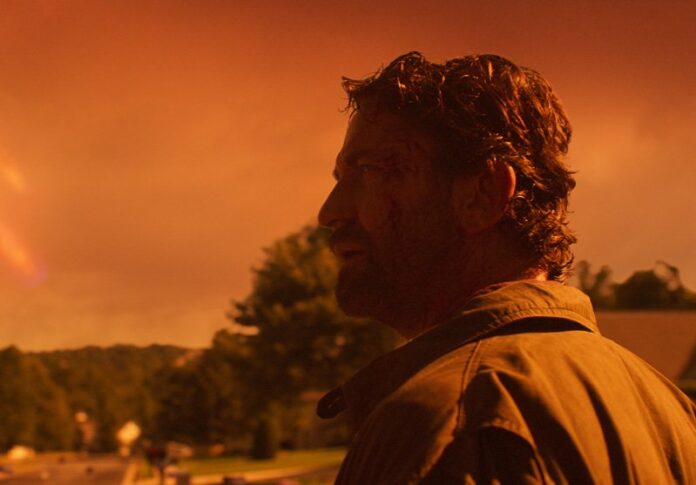 While Greenland may look like the typical “Gerard Butler saves the world from disaster” movie, it’s definitely a cut above. Directed by Ric Roman Waugh, who also worked with Butler on Angel Has Fallen, by far the best of that action franchise, Greenland finds the story concerned less with averting a planet-killing catastrophe, than with a husband’s attempts to keep his family safe from it. The typical Butler heroics and testosterone are pushed to the side, and yet this is a movie packed with thrills and some of the most believable impending apocalypse chaos the genre has seen.

For once, the scenes of a family’s marital strife aren’t just window dressing, as they tend to be in most disaster movies. From the moment John (Butler) tip-toes sheepishly into his own home and awkwardly addresses his wife Allison (Deadpool‘s Morena Baccarin), we know there’s tension between them. But that all needs to be put aside, both for the sake of their diabetic son, Nathan (Roger Dale Floyd), and because of the giant planet-killing comet pieces hurtling towards Earth.

Waugh and the screenplay by Chris Sparling understand how learning something like this immediately changes one’s perspective on what’s important. The movie doesn’t focus so much on the apocalypse itself, but how it impacts both this one family and the world at large. Immediately, everything descends into mayhem, and it starts when pieces of the Comet, nicknamed Clarke, totally wipes Tampa off the face of the map. John gets an emergency text message from the government saying that he and only his family can come to a special bunker for those chosen to survive. Mind you, this was done in front of ALL of their friends, who are understandably pissed, resentful, and desperate. It was actually sorta funny.

What follows is a complete breakdown of society, where John and Allison are separated at the evacuation facility by a common error, then go on to experience all of the awful ways people treat one another when in survival mode. With its eyes constantly earthbound, Greenland steadily amps up the craziness, beginning with a pack of armed looters in a pharmacy, and increasing as John seeks safe passage aboard a truck full of refugees. It’s a short journey in which the other riders revert to their most base instincts, causing a horrific wreck and a sudden act of violence that leaves John shaken.

In a haunting sequence that would be like any parent’s worst nightmare, Allison and Nathan catch a ride with a seemingly devout couple (played by Hope Davis and David Denman) who decide the boy would be better off with them than with his own mother.

What’s scary about Greenland is how much it resembles the here and now, as the selfish actions of a few during a pandemic have negatively impacted us all. Violent protests breakout across the globe, entire cities are destroyed in the blink of an eye, all carried by news reports lending an ominous atmosphere. Meanwhile, a memorable moment finds a group of rooftop partyers welcoming the coming apocalypse.

The action rarely goes slack, which is saying something for a film that is especially character-driven. An interlude featuring the welcome appearance of Scott Glenn as Allison’s crusty, stubborn father, offers a much-needed breather. Of course, it’s short-lived as the comet, which seems to be following this poor family unit, makes its presence felt.

The final stretch does revert to familiar territory, as John and Co. face the coming catastrophe head-on. Scenes of tremendous spectacle are to be expected, and while not on the VFX scale of a Roland Emmerich movie, Greenland more than makes up for it by what it does that is unexpected. There’s teasing of a larger story to be told, and if this does become a franchise here’s hoping the attentions can remain earthbound rather than in the sky.