It should be clear to anyone who saw Boots Riley’s absurdist directorial debut Sorry to Bother You that he is not your average filmmaker with boring, familiar ideas. What might be described as a coming-of-age story to him, might turn out to be…well, about a 13-foot-tall black man living in Oakland. And that’s what Riley has promised with his upcoming series, I’m a Virgo, which has been given a green light by Amazon Studios.

According to Variety, Emmy-winner Jharrel Jerome is confirmed to star in Riley’s I’m a Virgo series which has been given a series order by Amazon. The half-hour show is about exactly what I said before, a a coming-of-age story about a 13-foot-tall black man living in Oakland, CA. What else does it entail? Who knows? But this is Boots Riley we’re talking about so it could be anything.

Riley will write, direct, and exec-produce, although he teases that it could be a short-term gig… 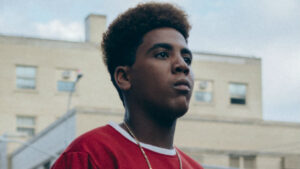 “I’m thrilled to be working with Amazon on this project,” said Riley. “This show will either have me lauded or banned, and as such, I have demanded payment upfront.”

Jerome turned heads as part of Barry Jenkins’ Oscar-winning Moonlight. He then won an Emmy for his performance in Ava DuVernay’s incredible When They See Us. The next film he has coming up is Concrete Cowboys alongside Idris Elba.