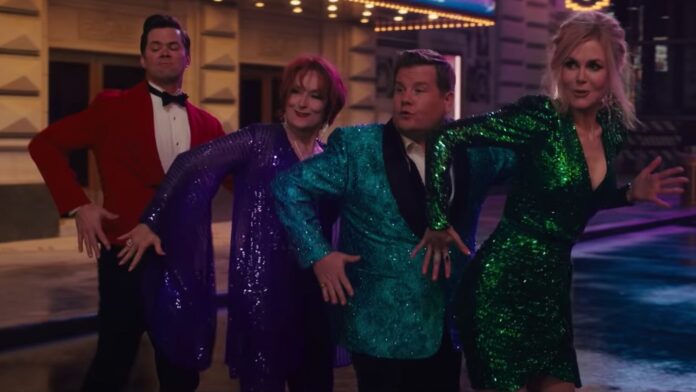 Netflix is giving you a side of Broadway style to go with your turkey this Thanksgiving! They’ve released a full-length trailer for The Prom, Ryan Murphy’s star-studded adaptation of the musical stage show and featuring a cast worth giving thanks for: Meryl Streep, Nicole Kidman, James Corden, and Andrew Rannells.

This footage isn’t just about the starry leads, even though it’s a treat to watch them sing, dance, and raise Hell to their hearts’ content. We’re introduced to high schooler Emma, played by Jo Ellen Pellman, who just wants to enjoy prom with her girlfriend, only to be rejected by the PTA, led, as if it wasn’t painful enough, by her girlfriend’s mother. When a group of Broadway stars looking for a cause to champion come to her rescue, Emma finds her world turned upside down.

I’m right there with Keegan-Michael Key when he says “Okay, that got to me”, because this trailer is a pure joy. This kind of thing really isn’t my bag, and Lord knows Murphy’s TV shows get on my nerves, but I love how happy, hopeful, and just plain fun this looks. Sign me up.