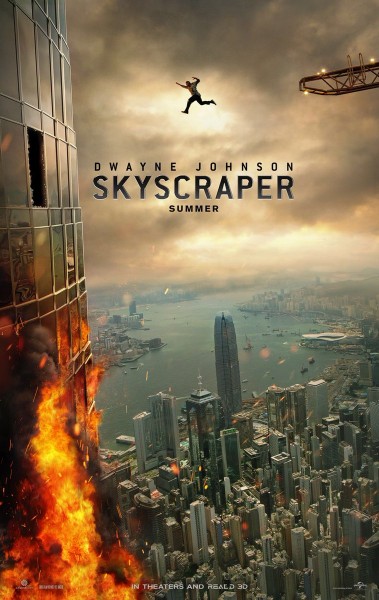 *UPDATE* Dwayne Johnson hit up The Tonight Show with Jimmy Fallon and brought along with him the full trailer for Skyscraper. You an check it out below!

There’s going to be a lot of Dwayne Johnson saving the world this summer. Hope you’re ready for it. He’s already got the #1 movie in the country with Jumanji: Welcome to the Jungle, and now you’ve got Rampage coming up in April, and this summer he’ll leap between buildings with a single bound in Skyscraper.

The Super Bowl spot for Skyscraper finds Johnson in hero mode, playing a former Hostage Rescue Team leader who now assesses the safety of skyscrapers. That’s a real thing.  While assessing the tallest building in the world in China, the whole thing goes up in smoke and he’s framed for the crime. Oh, and he needs to rescue his family from the building before it collapses.  This is based on an original idea by director Rawson Marshall Thurber (We’re the Millers), and it looks ludicrous and perfect for summer.

Here’s the synopsis: Global icon Dwayne Johnson leads the cast of Legendary’s Skyscraper as former FBI Hostage Rescue Team leader and U.S. war veteran Will Ford, who now assesses security for skyscrapers.  On assignment in China he finds the tallest, safest building in the world suddenly ablaze, and he’s been framed for it.  A wanted man on the run, Will must find those responsible, clear his name and somehow rescue his family who is trapped inside the building…above the fire line.