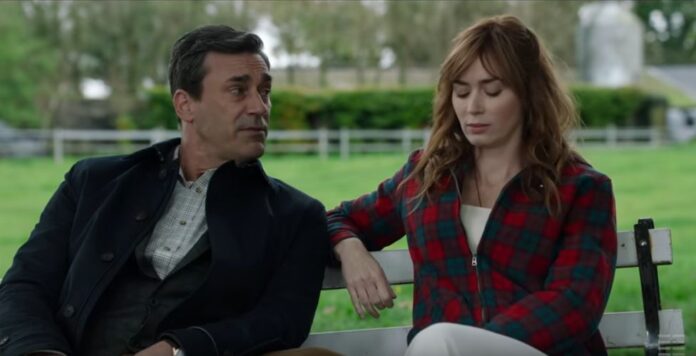 The trailer for Bleecker Street’s upcoming film Wild Mountain Thyme solidifies a few things for us. 1. Ireland is absolutely beautiful 2. They’ve assembled a dream cast for romantic-comedy and 3. The only thing better then Christopher Walken’s signature voice is Christopher Walken’s signature voice doing an Irish accent. Emily Blunt plays a woman trapped between her life-long love and next-door neighbor (next-farm neighbor?) Jamie Dornan and the new hotness in her life, and the American coming to buy her farm Jon Hamm. Decisions, decisions. I’m sure this will play out in a very formulaic way, but this seems to be one of those instances where that’s exactly as it should happen. There’s nothing wrong with formula if the surrounding pieces excel, and in this case those pieces seem to do just that for the reasons I mentioned above…well, not the Walken bit, I just thought that was hilarious enough to be mentioned. I’ve always been a fan of these small British Isle’s set romantic films, hell I still count Tamara Drewe amongst one of my most re-watchable films, so needless to say I’ll be hitting that ‘Purchase’ button when this hits VOD. It’s also being released in theaters the same day so, God willing, I may even be able to see it in a theater!

Wild Mountain Thyme is in Theaters and On Demand on December 11th, 2020.