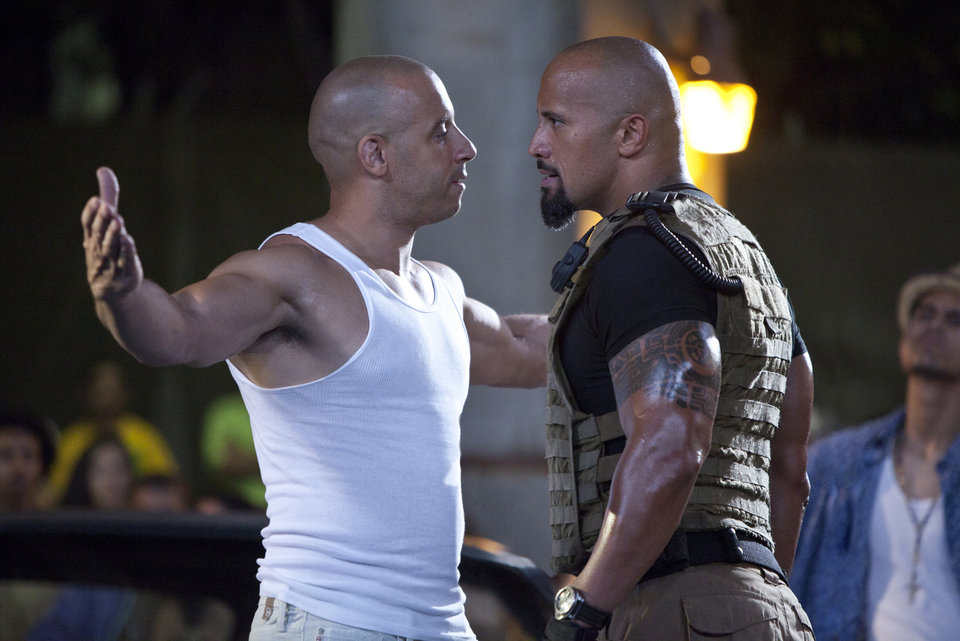 Because I look at everything through the lens of professional wrestling, the Fast & the Furious movies are the Bullet Club of movie franchises.  They may not be the biggest, or even the best, but they have the loudest, most devoted fanbase and are always entertaining. Plus, they have a pair of super Alpha Male egos butting heads that threaten to ruin the whole thing. Vin Diesel and Dwayne Johnson have been clashing for years, ever since Johnson called Diesel a “candyass” for his on-set behavior, but it exploded with The Fate of the Furious, which saw it go public in an ugly way.

Reports surfaced that Johnson and Diesel refused to shoot scenes together in the film, and audiences could tell because neither Dom Toretto or Luke Hobbs ever shared the screen. Weird for the franchise’s two most popular characters. Things got worse when Johnson and co-star Jason Statham were given their own spinoff movie, without Diesel, who wields tremendous power over the movies, having much of a say. While it seemed like the beef between Johnson and Diesel was squashed, there is clearly some tension still in the air.

Johnson first confirmed with Rolling Stone that he and Diesel did not have a single scene together in The Fate of the Furious, saying “That is correct. We were not in any scenes together.”


As for where things stand now, Johnson says he and Diesel had a heart-to-heart conversation, and that’s when he realized things between them may be too far gone…

“Vin and I had a few discussions, including an important face-to-face in my trailer. And what I came to realize is that we have a fundamental difference in philosophies on how we approach moviemaking and collaborating. It took me some time, but I’m grateful for that clarity. Whether we work together again or not.”


It’s that last bit which caught the interviewer’s attention, and Johnson revealed that he may not return for Fast & Furious 9. Instead he’s fully setting his mind on his Hobbs/Shaw spinoff flick with Statham. He’s still not happy with Diesel, though…

“Right now I’m concentrating on making the [Fast and Furious Hobbs and Shaw] spinoff as good as it can be,” Johnson said. “I wish [Diesel] all the best and I harbor no ill will there, just because of the clarity we have. Actually, you can erase that last part about ‘no ill will.’ We’ll just keep it with the clarity.”


Oh, why can’t Cody and Kenny Omega just get along??  Anyway, the Fast & Furious movies will survive with our without Johnson, and in fact they may become bigger and more successful if this spinoff takes (It will) like producers hope. And you can bet that no matter what, enough cash will be thrown around that someday we will see Diesel and Johnson’s bald heads on the same set again.