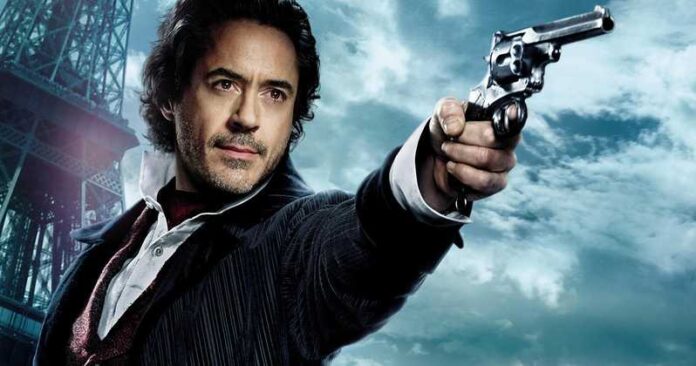 So let’s say you’re Robert Downey Jr. and you’ve just been killed off from the MCU, the biggest and most successful cinematic universe in history. What are you going to do to not only replace the $$$ you were making from that, but to keep yourself at the centerpiece of something bigger than a single role?  Take another of your popular characters and build another cinematic universe, that’s what.

Downey spoke at an event for FastCompany, and the subject of Sherlock Holmes 3 came up. That franchise has been on ice since 2011’s A Game of Shadows, while the sequel has been tentatively slotted for December 2021. But Downey’s plans go beyond a single movie. He and his producer partner/wife Susan Downey are looking to create a Sherlock Holmes “mystery-verse” centered on Sir Arthur Conan Doyle’s iconic detective.

“At this point, we really feel that there is not a mystery-verse built out anywhere, and Conan Doyle is the definitive voice in that arena, I think, to this day,” Downey said. “So to me, why do a third movie if you’re not going to be able to spin off into some real gems of diversity and other times and elements?”

Susan added, “We think there’s an opportunity to build it out more. Spin-off characters from a third movie, to see what’s going on in the television landscape, to see what Warner Media is starting to build out, things with HBO and HBO Max.”

Maybe they can find a way to work out a deal with Netflix to bring in Enola Holmes? Pretty please? Perhaps a series based on Mycroft Holmes, who in the Downey/Jude Law films is played by the great Stephen Fry! I’d pay for that. Robert and Susan Downey are obviously huge fans of whodunnits, and are producers on HBO’s Perry Mason series. Remember, he wanted to star in a movie version of Mason before he got all busy doing Iron Man stuff.

There’s potential here, and on the small-screen it might actually work. We’ll see how far this goes, but first they need to get Sherlock Holmes 3 off the ground first, and that has proven to be difficult enough.