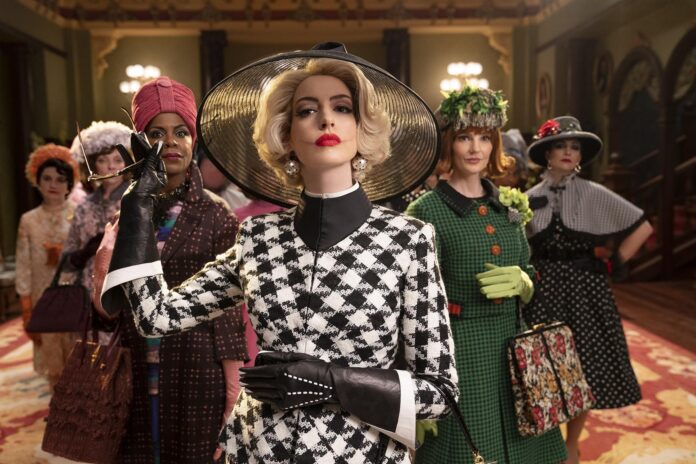 Roald Dahl adaptations are always tricky to pull off, because the author’s work often teeters between childish flights of fancy and the stuff of nightmares. Get the balance wrong, as Robert Zemeckis’ painfully dull HBO Max film The Witches does, and what you get is something that kids and adults alike will be too bored to watch, despite Anne Hathaway’s fun attempts to devour the scenery.

For young Charlie (Jahzir Bruno), life has hit him harder than it should for a boy his age. The only survivor of an accident that killed his parents, Charlie is picked up by his grandmother Agatha (Octavia Spencer) to live with her in Alabama. Agatha is a classic Spencer character; hard on the outside but with a soft, gooey center that’s as kind as the day is long. When Charlie encounters a witch in their neighborhood, Agatha confirms that witches are indeed real. They dress up as well-to-do women, wear heavy make-up, hide their wide mouths and fangs, and wear gloves to disguise their claws. They also despise children, particularly the way they smell, and want to see them all destroyed.

In hopes of getting off the witch’s radar, they check-in to a fancy hotel, only to find that the Grand High Witch (Hathaway) is there, too, accompanied by an entire coven who have a plan to turn all of the world’s children into mice. Charlie, who is perhaps too naive and innocent for his own good, eventually gets caught and poofed into a mouse. Joined by his overweight friend Bruno (Codie-Lei Eastick) and southern belle Daisy (Kristin Chenoweth), Charlie must stop the witches’ plan and, hopefully, return to normal.

Zemeckis just can’t seem to get much right lately. He’s been on a horrendous streak with the awful Welcome to Marwen, high-wire drama The Walk, and the flat WWII romance Allied to his recent credits. In virtually every case, Zemeckis’ instincts were way off the mark and he ended up making films that run counter to the reasons anybody would want to see them. The same goes for The Witches, which grants us the opportunity to see Hathaway go to deliciously evil heights in a role made terrifying by Anjelica Huston in Nicolas Roeg’s 1990 film. While Hathaway is indeed having a ball with her overdone Eastern accent and Melania Trump-esque fashion sense, what scares her performance might’ve elicited are buried under loads of terrible CGI and campy shenanigans that lack any edge whatsoever.

Years removed from the noble but disastrous motion-capture films that sank Zemeckis’ career for a spell, he’s been struggling to incorporate computer effects with live-action ever since. The mice-children of The Witches look shoddy and don’t blend well with the natural environments, while the vulture-like coven are more comical than intended. This is all despite the presence of creature effects guru Guillermo Del Toro, who lends his talents to the screenplay along with Zemeckis and Black-ish creator Kenya Barris.

We can assume the presence of Barris accounts for one of the film’s most promising strokes. The Witches begins with exuberant narration by Chris Rock, establishing the film in 1968 in the Civil Rights-era south. Focusing the film on black lead characters is a brilliant move, and the opening moments are surprisingly souful and a little reminiscent of HBO’s Lovecraft Country. If only they could’ve kept that up, but The Witches makes little use of the race angle. The witches don’t have any particular care or interest in black children; they hate all kids. There is so much more that could have been done to make better use of the period and the racial tensions that surround this supernatural adventure. Kids can handle tough issues if you give them the opportunity.

There are clever touches, though, that hint at a more enjoyable, more subversive film. The Grand High Witch poses as the head of The International Society for the Prevention of Cruelty to Children, which recalls those seemingly altruistic organizations whose public goal is the complete opposite of their private aims. The witches only feed on poor children, we’re told, because nobody cares when they go missing. It is a sad but plausible theory that is undercut by the “kill ’em all” strategy the entire movie relies on. Also, who can refuse a The Devil Wears Prada reunion? Stanley Tucci lightens the mood with a ridiculous circus act as hotel manager Mr. Stringer, who twists himself into knots trying to keep the place running smoothly while appeasing the coven’s every devious desire.

While Spencer’s Agatha is the heartwarming, tough-love character we expect from her, she’s surrounded by a young cast that doesn’t offer up much to work with. Only she and Hathaway have an idea of the frightening/fantastical tone that needs to be struck, and their performances are probably the only thing most will remember about Zemeckis’ version of The Witches, at least until another director comes along to give it a shot.