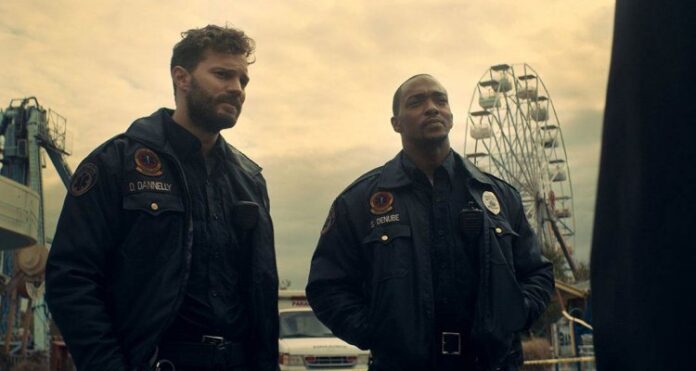 Synchronic starts out going one way, like the arthouse version of Scorsese’s Bringing Out the Dead, but turns out to be something else entirely Anthony Mackie and Jamie Dornan are exhausted New Orleans EMTs Steve and Dennis. The two are longtime best friends and get along with an easy rhythm and slang that proves it. Both guys fit neatly into cinematic stereotypes: Steve is the ladies man (a familiar role for Mackie), while Dennis is the reasonable and responsible family guy. He might be a bit somber, but that’s for missing the bachelor life he sees his pal living each night. Steve feels just the opposite, and wonders why he’s never been able to settle down.

That setup is all a ruse for writers/directors Aaron Moorhead and Justin Benson, who craft a genre-bending thinkpiece wrapped in a mystery. As intriguing as the premise turns out to be, this time-hopping snoozer lacks compelling characters and isn’t nearly as deep as it thinks it is. It’s unfortunate, because Mackie and Dornan, two actors who elevate this movie’s profile considerably with their blockbuster cred, throw themselves into their roles with both feet.

Synchronic is the name of a designer drug that turns Dennis and Steve’s lives upside down. First, by suddenly giving them a wave of strange overdoses to clean up during their nightly routine. Later, when Steve is diagnosed with a terminal illness, he takes it upon himself to get the drug out of circulation. That goal takes greater precedent when Dennis’ teen daughter Brianna (Ally Ioannides) disappears after partying on the drug. Steve, who is especially sensitive to the drug’s trippy effects, figures out that those who use it are sent back into a random past, usually right in the middle of dangerous predicaments. He takes it upon himself to use the drug and find Brianna before she gets hurt or is stuck there forever.

The time travel aspect isn’t given much of an explanation, with the sequences themselves seeming like the directors test-casing themselves for future studio work. Steve finds himself dropped into a confrontation with a Spanish conquistador, and into the Ice Age opposite a prehistoric man, and in most cases he’s the only black guy around which has its own dangers. But there isn’t much that is actually done with these brief sequences. They don’t inform us about Steve much, although his illness transforms him from a busy lothario into a sad sack who spouts greeting card platitudes. For all of his many monologues, the best Steve really comes up with is that “the past sucks” and “the present is a miracle.”

Not too deep, this movie. Visually, however, the directors push their budgets during the psychedelic stretches so that they’re always a treat for the eyes. It may also explain why the version of New Orleans we see is a dank, dark ghost town where few people seem to exist. A lot of movies have been made in the city lately and this is easily the least-populated of them all, resembling a post-apocalyptic thriller.

What little humor there is gets swallowed up by the brooding mood, but it doesn’t hold back Mackie and Dornan. Together, they provide charm and authenticity as best buds on opposing life tracks, but Dornan’s character gets shuffled into the background as Steve gets high on time travel pills.

An attempt to end on an upbeat note, matching Steve’s life-affirming realizations, doesn’t fit with the established mood and is ultimately unsatisfying. Moorhead and Benson have developed a following for their brainy genre efforts, and Synchronic might eventually find a base of fans looking for sci-fi that puts atmospherics ahead of action.

‘Something In The Dirt’ Teaser: ‘Synchronic’ And ‘Moon Knight’ Duo Go Down A Cosmic Horror Rabbit Hole