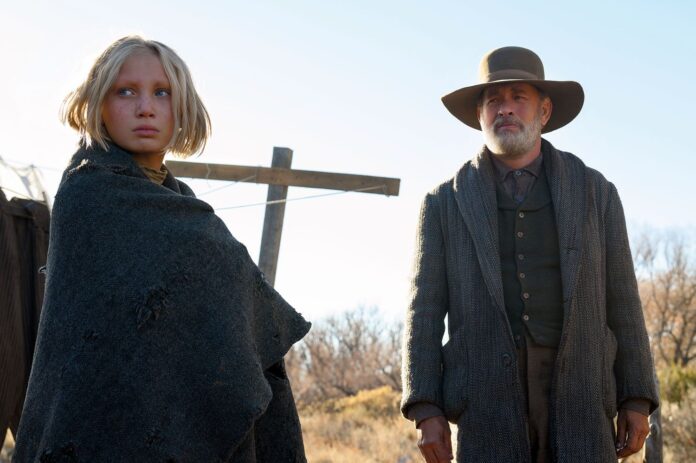 Following on the debut images revealed yesterday, a teaser for Paul Greengrass’ News of the World is here. The Old West drama stars Tom Hanks as Captain Jefferson Kyle Kidd, who in the years following the Civil War, travels through Texas bringing news from across the globe. He is enlisted to escort a rescued girl to her family, which brings life lessons and other unexpected challenges.

Hanks isn’t the guy we typically think of when it comes to Westerns, but he’s right at home in a role that finds him as a guardian, protector, and dispenser of wisdom. The film co-stars Helena Zengel, who figures prominently in this footage, as well as Elizabeth Marvel and Mare Winningham.

This marks a reunion between Greengrass and Hanks, who worked together previously on the multiple Oscar-nominated Captain Phillips. The script is by Greengrass and Lion writer Luke Davies, adapting the novel by Paulette Jiles.

News of the World opens on Christmas Day.

SYNOPSIS: Five years after the end of the Civil War, Captain Jefferson Kyle Kidd (Hanks), a widower and veteran of three wars, now moves from town to town as a non-fiction storyteller, sharing the news of presidents and queens, glorious feuds, devastating catastrophes, and gripping adventures from the far reaches of the globe.

In the plains of Texas, he crosses paths with Johanna (Helena Zengel, System Crasher), a 10-year-old taken in by the Kiowa people six years earlier and raised as one of their own. Johanna, hostile to a world she’s never experienced, is being returned to her biological aunt and uncle against her will. Kidd agrees to deliver the child where the law says she belongs. As they travel hundreds of miles into the unforgiving wilderness, the two will face tremendous challenges of both human and natural forces as they search for a place that either can call home.