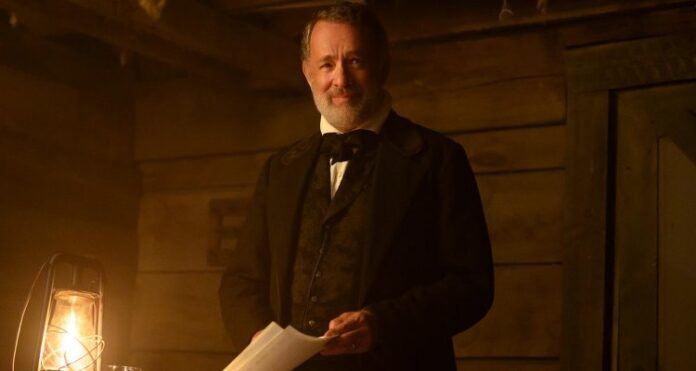 While practically every blockbuster has fled 2020 to the supposedly-safer atmosphere of 2021, the major awards season dramas are holding steady. And one that we haven’t seen anything from yet is Paul Greengrass and Tom Hanks’ News of the World, which promises to make the actor the endearing, beloved figure we need while the world is in chaos.

Based on Paulette Jiles’ novel, the film stars Hanks as Captain Jefferson Kidd, a world traveler who arrives in Texas bringing news from all across the globe to people of the Old West. Into his custody is placed a young girl (Helena Zengel)
whose parents have been murdered by raiders, and he’s charged with returning her to the only family she has left.

The script was co-written by Greengrass, who worked with Hanks on Captain Phillips, and Lion writer Luke Davies.

What’s interesting is that the story takes place in the late 19th-century but so much of it feels timely, especially in regards to the media. Greengrass tells Vanity Fair, who revealed the first image of Hanks in his role as Kidd…

“Even though it’s set then, it’s a film about our times,” Greengrass added. “Neighbors and families and communities were in stark and often violent conflict with each other, and Americans needed to decide who they were as Americans.”

News of the World hits theaters on Christmas Day.

News of the World VFpics
1 of 5

‘Finch’ First Look: Tom Hanks, A Dog, And A Robot Go On A Post-Apocalyptic Journey This November