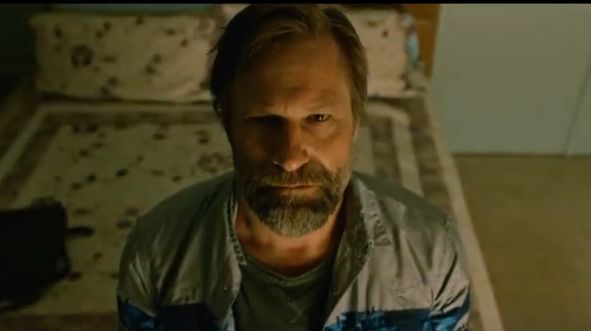 The tense trailer for Wander is here and the first thing I realized was how long it had been since I’d seen Aaron Eckhart. After the late-00’s I would have put sure money on Eckhart being an A-list mainstay for at least the next 15-20 years. He’s an amazing performer with a look that’s both generic and distinct. However, in 2016 his output dropped tremendously, and it would appear the drop was due to being more selective with his projects. His filmography is no longer littered with ‘… has Fallen’ titles, or generic action films. This whole long intro is mainly just to say that Wander, the film that brings us to this moment, seems to carry some gravitas and may just be hitting at the perfect time. Echart’s Character Arthur is a private eye hired to investigate a death in the small town of Wander. Arthur is already unstable due to the recent death of his daughter for the cause of a conspiracy cover-up, so when his findings in Wander start to look connected to his daughters death he dives head first in a world of lies, deception, conspiracy, and rural America. Obviously, conspiracy theories are at a recent high in terms of public interest, and I hope it draws some viewers because other then Eckhart the film sports a pretty impressive cast in Tommy Lee Jones, Heather Graham, and Katheryn Winnick.

Wander Hits Theaters, Digital, and On Demand in a little over a month on December 4th, 2020.

After getting hired to probe a suspicious death in the small town of Wander, a mentally unstable private investigator becomes convinced the case is linked to the same ‘conspiracy cover up’ that caused the death of his daughter.