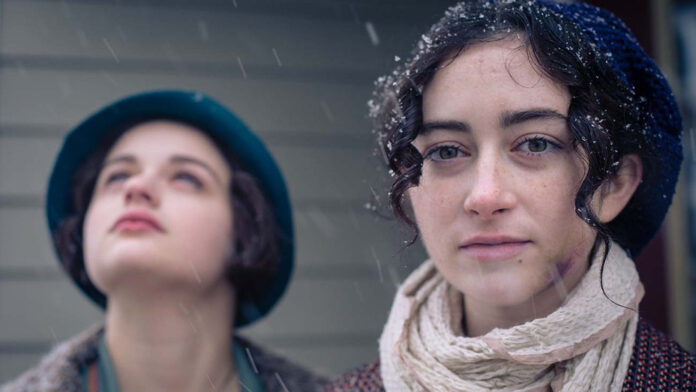 Filmmaker Lydia Dean Pilcher has found her niche this year exploring little-known chapters in female history. Her film A Call to Spy took a look at Britain’s female spies during WWII, while her latest, which actually was completed in 2018 and delayed for a host of reasons including COVID-19, is Radium Girls. A well-intentioned drama about the dangers of out-of-control business practices and our penchant to fall for “miracle cures” during times of crisis (hydroxychloroquine, anyone?), the film features a cast of rising stars who do their best with the slight material given to this meaningful based-in-fact story.

Almost like a spinoff to the recent Marie Curie film Radioactive, Pilcher’s drama Radium Girls is set in the 1920s with the discovery of radium and polonium, elements that wowed scientists, doctors, and potential consumers with their wide-ranging properties. Radium in particular was used everywhere; it was made into nail polish, into house paint, and included in watch faces to give that extra special glow. The film begins with an archival lesson about the ways in which radium was peddled to the masses, who at the time were on the cusp of The Great Depression.

Joey King and Abby Quinn play sisters Bessie and Jo, workers at the fictional American Radium company (the real-life company United States Radium Corporation ran for 50 years), one of those sweatshops with women jammed in tiny spaces, working in unsafe conditions that would be heavily relegated in years to come. Bessie and Jo painted watch dials with a substance laced with radium, and one of the techniques to be the best was to lick the tip of the brush. With jobs so scarce, each woman was doing whatever they could to impress. A lot of women taking in a lot of radium day in, and day out.

When Jo’s teeth begin to fall out, a disturbing sign of an illness that killed their oldest sister just years prior, Bessie, the more rebellious of the two, knows what is going on. When a dispassionate company doctor offers a deliberately humiliating diagnosis of syphilis, Bessie takes it upon herself to fight back in the only ways she knows how; by rallying other women and drawing public attention to an issue many are eager to ignore.

Radium Girls isn’t just about what happened to Bessie, Jo, and other women like them, many of which are based on real-life figures. It’s about a culture that was quick to turn a blind eye to issues affecting women, especially those of the working class. The screenplay by co-writer/co-director Ginny Mohler has its focus on Bessie’s transformation into a radical progressive activist, beginning as a naïve girl shouting to anybody who would hear her, and later as someone fairly skillful in playing to an audience. But along the way, Jo’s tragic story gets lost, and so too the other women whose stories are no different than hers. Mohler and Pilcher move through events in dispassionate fashion, leaving behind the righteous fury that fueled the women of this moment in labor right history.

Making the most of what had to be a limited production budget, Pilcher does an amazing job capturing the period aesthetics, from the costumes, to the factories, and more, although the continued use of historical footage is a step too far. She puts the most emotional burden on King, who as usual is so good at combining innocence with a rebel spirit. If only Quinn, who has been excellent in everything from Landline to Little Women, could have been given more screen time as Jo, who holds with her an air of defiance even as her condition worsens. Cara Seymour also adds a welcome fire as a fellow crusader who knows how tough it will be to change the hearts and minds of those who have been trained to think radium is the one shining thing in their lives.

Radium Girls is an admirable effort that, if it had more passion behind it, would’ve captured the activist spirit that is sweeping the country right now. Even so, it’s clear that everyone involved cares about spotlighting these women and what they endured. If the best accomplishment is more attention from Hollywood and better movies on the radium girls, then that’s not so bad.