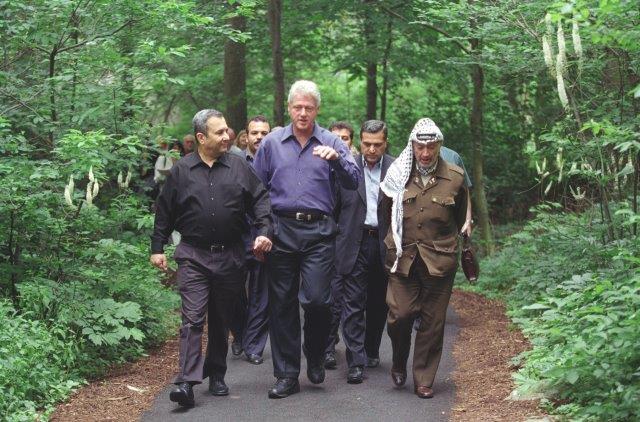 One of the most complicated things of the 20th and 21st centuries is the peace process between Israel and Palestine. This has been going on for the last 30 years and has its share of successes, but plenty of failures along the way. Even to this date, there are still substantial hurdles in regard to maintaining peace in the region based on religion, xenophobia, politics, and a wide range of other issues. Every incoming American president says, “I will solve the crisis in the Middle East,” and every single one of them leaves office frustrated on how little change was made during their tenure. Academy Award-nominated Israeli documentary filmmaker Dror Moreh (The Gatekeepers) examined the many attempts at the peace process by the Clinton Administration in his latest film The Human Factor.

Right off the top, what makes The Human Factor so fascinating is that it spends its time not going through historical anecdotes, but instead interviewing members of the State Department who were a part of the peace process during the Clinton Administration. Not only gives you a history lesson on what has transpired during that time, but it also gives you a rarely seen behind-the-scenes access as to how the sausage was made (or not made in the example of the Middle East peace process). Heads of State like Bill Clinton, Ehud Barak, Ehud Olmert, and Benjamin Netanyahu, unfortunately, were not interviewed for the documentary, speaking with “the grunts” who were in the weeds proved to be more effective and almost gives the user a seat at the table, as well as they, revisit how they worked and all the “external factors” and “missed opportunities” that impacted the peace process that is still being worked on today.

And man there are setbacks. From Israel’s “civil war” that ended with Israeli Prime Minister Yitzhak Rabin’s assassination by an Israeli right-wing nationalist, to PLO Chairman Yasser Arafat’s demand to be taken more seriously by both American and Israeli negotiators, to Benjamin Netanyahu’s aggressive approach to negotiations (as his first meeting with Clinton had Clinton asking his advisors “does he know who the superpower is?”), to even the Monica Lewinski scandal: the peace process has always been a tricky process. This is why the title of the film, The Human Factor is an important missing part of the peace process. Originally the film was titled “The Negotiators,” but after more than 40 hours of interviews with State Department negotiators, they advised that that the respect of each side as a human being has been missing throughout the process. In effect, the “human factor” is what has been missing all these years.

The Human Factor is by no means giving voice to both sides of the argument. State Department interviewee Aaron David Miller describes the United States as “Israel’s Lawyer” in his criticism of some of America’s policies when it comes to the Middle East is a good example of how one-sided the peace process has been. In addition, no members representing the Palestinian side of the argument (former negotiators, etc) are interview subjects in The Human Factor. As a result, we don’t really get to explore both sides of this situation, but that doesn’t seem to be what Moreh wanted to convey in the documentary by design.

That said, The Human Factor has the right amount of history, pathos, and visuals (using Clinton Library archives supplemented by CGI) to be fully engaging in how everything has transpired during the years where peace seemed to be so close, and seemingly slipped through everyone’s fingers at the last moment. The montage at the end of The Human Factor showcases subsequent administrations (Bush II, Obama, Trump) attempts to secure peace intertwined with visuals of violence between Israel and Palestine to show that peace is still a long way away as long as the human factor is missing.

The Human Factor is available in select theaters.