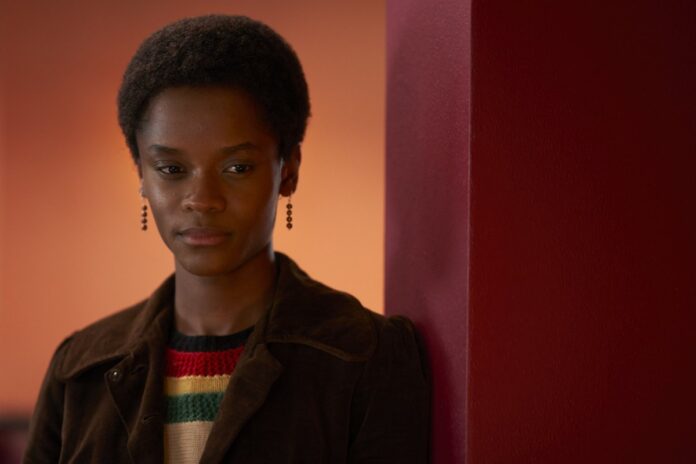 Director Steve McQueen, the guy behind 12 Years a Slave, Shame, Widows, and Hunger, is making his presence felt this fall awards season. Not with a single film, but with five as part of his Small Axe anthology on Amazon Prime. The series of films focuses on the West Indian community in London during the ’60s thru the ’80s, telling stories of revolution and activism. Leitita Wright, John Boyega, Shaun Parkes, Michael Ward, Amarah-Jae St. Aubyn, Kenyah Sandy, and Sheyi Cole all feature in the films about people who have been “shaped by their own force of will despite rampant racism and discrimination.”

The new trailer for Small Axe gives a look at every film in the anthology, kicking off on November 20th with Mangrove, which stars Black Panther breakout Letitia Wright and already has a trailer all to itself.

Mangrove centers on Frank Crichlow (Shaun Parkes), the owner of Notting Hill’s Caribbean restaurant, Mangrove, a lively community base for locals, intellectuals and activists. In a reign of racist terror, the local police raid Mangrove time after time, making Frank and the local community take to the streets in peaceful protest in 1970. When nine men and women, including Frank and leader of the British Black Panther Movement Altheia Jones-LeCointe (Letitia Wright), and activist Darcus Howe (Malachi Kirby), are wrongly arrested and charged with incitement to riot, a highly publicized trial ensues, leading to hard-fought win for those fighting against discrimination.

Lovers Rock tells a fictional story of young love at a Blues party in 1980. The film is an ode to the romantic reggae genre called “Lovers Rock” and to the Black youth who found freedom and love in its sound in London house parties, when they were unwelcome in white nightclubs.

Education is the coming of age story of 12-year-old Kingsley (Kenyah Sandy), who has a fascination for astronauts and rockets. When Kingsley is pulled to the headmaster’s office for being disruptive in class, he discovers he’s being sent to a school for those with “special needs.” Distracted by working two jobs, his parents (Sharlene Smith, Daniel Francis) are unaware of the unofficial segregation policy at play, preventing many Black children from receiving the education they deserve, until a group of West Indian women take matters into their own hands.

Alex Wheatle follows the true story of award-winning writer, Alex Wheatle (Sheyi Cole), from a young boy through his early adult years. Having spent his childhood in a mostly white institutional care home with no love or family, he finally finds not only a sense of community for the first time in Brixton, but his identity and ability to grow his passion for music and DJ’ing. When he is thrown in prison during the Brixton Uprising of 1981, he confronts his past and sees a path to healing.

Red, White and Blue tells the true story of Leroy Logan (John Boyega), a young forensic scientist with a yearning to do more than his solitary laboratory work. When he sees his father assaulted by two policemen, he finds himself driven to revisiting a childhood ambition to become a police officer; an ambition borne from the naïve hope of wanting to change racist attitudes from within. Leroy must face the consequences of his father’s disapproval, and the blatant racism he finds in his new role as a despised yet exemplary constable in the Metropolitan Police Force.

Lovers Rock and Mangrove have already earned their share of acclaim after premiering at the Cannes Film Festival.  They are also part of the NYFF slate along with Red, White and Blue.