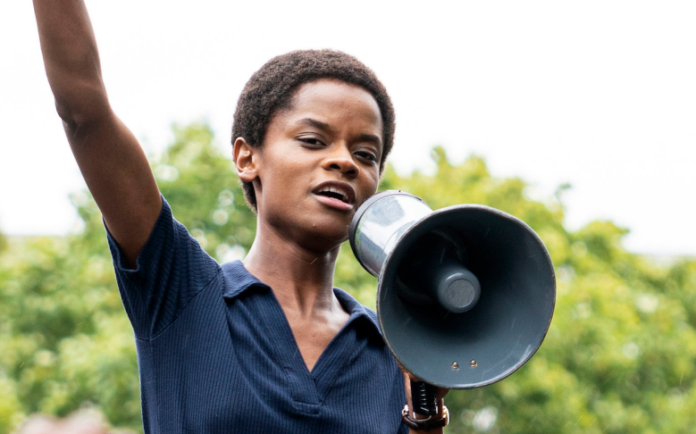 After a five year wait, Steve McQueen followed his Best Picture-winning 12 Years a Slave with 2018’s Widows. While I had some issues with the film, nobody could’ve expected it to be as overlooked as it was during awards season. Perhaps that motivated him to quickly rebound with a more ambitious project, the Amazon-BBC anthology Small Axe, a collection of mini-films focused on racism and black activism. Mangrove is one of the movies in McQueen’s anthology, and it stars Black Panther breakout, Letitia Wright, as member of a little-known activist group in West London.

Mangrove centers on the Mangrove Nine, a group of black activists charged with inciting a riot against Notting Hill police in 1970. The cast is led by Wright, who looks to give a fiery portrayal in this trailer, hopefully one that gets her into more leading roles. She’s joined by Shaun Parkes, Malachi Kirby, Rochenda Sandall, Jack Lowden, Sam Spruell, Gershwyn Eustache Jnr, Nathaniel Martello-White, Richie Campbell, Jumayn Hunter, and Gary Beadle.

BBC and Amazon will debut the Small Axe films later this year. Another, titled Lover’s Rock, will have its world premiere at New York Film Festival.

SYNOPSIS: Mangrove is the true story of the Mangrove 9, a group of Black activists who clashed with London police during a protest march in 1970, and the highly publicized trial that followed. The trial was the first judicial acknowledgment of behavior motivated by racial hatred within the Metropolitan Police.

Mangrove is one of five films from Small Axe, a drama anthology which comprises five original films by Academy Award, Bafta, and Golden Globe-winning filmmaker Steve McQueen (Hunger, 12 Years A Slave). Set from the late 1960s to the mid-1980s, the films each tell a different story involving London’s West Indian community, whose lives have been shaped by their own force of will despite rampant racism and discrimination. The title is derived from an African proverb, which has resonance throughout the Caribbean, “if you are the big tree, we are the small axe”. This was made popular by Bob Marley in The Wailers song Small Axe from the album Burnin’ (1973).

‘Education’ Trailer: Steve McQueen Wraps Up “Small Axe” With A Look At Systemic Racism In The Classroom