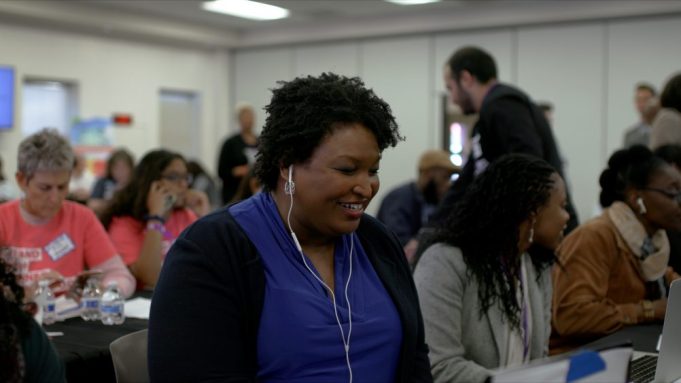 As the occupant of the White House continues to work overtime to prevent Americans from voting, there are organized efforts around the country to thwart him. One of those leading the charge against Trump’s tactics is Stacey Abrams, a rising star of the Democratic Party who was screwed out of the Georgia Governor’s race by a razor thin margin. She’s at the centerpiece of the powerful documentary, All In: The Fight for Democracy, which Amazon Studios is making free to watch tomorrow for National Voter Registration Day.

All In: The Fight for Democracy will be free for 24hrs tomorrow, September 22nd, on Amazon Prime, Twitch, Twitter, and Youtube. There will also be watch parties hosted by Abrams and Lin-Manuel Miranda and Neeko.

The film centers on voter suppression efforts in the U.S., with a focus on the Georgia gubernatorial run between Abrams and Brian Kemp. Kemp, who was Georgia’s Secretary of State at the time, had control of the elections and tilted them to his own favor through voter suppression tactics; such as the early closing of polling places in Democratic distracts, purging of the voter rolls, etc.

Liz Garbus and Lisa Cortés directed the documentary, which opened just days ago on September 18th.

One of my all-time favorite memes has a picture of a laughing Jeff Bezos, founder of Amazon, with a caption that says “Jeff Bezos accidentally sends millions of ballots through Amazon One-Day shipping”. Bezos is somebody Trump has an irrational hatred for, and while he isn’t likely to be sending out any ballot registrations, Bezos can stick it to the Prez a little bit by making a movie about voter suppression free to watch.

‘All In: The Fight For Democracy’ Trailer Reveals Stacey Abrams’ Voter Suppression Doc