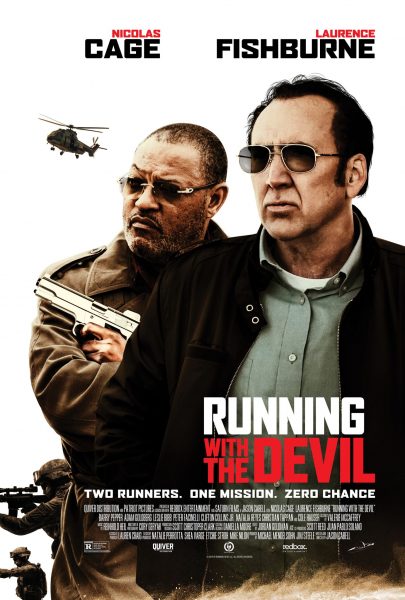 There hasn’t been much reason to be excited about  Nicolas Cage movie since Mandy, but maybe that’s about to change. Running with the Devil is a drug trafficking thriller with a stacked cast that includes Cage, Laurence Fishburne, Leslie Bibb, Natalia Reyes, Barry Pepper, Peter Facinelli, Adam Goldberg, Clifton Collins Jr., Cole Hauser, and more. Most importantly, it looks like a real movie with a Breaking Bad-esque role for Cage to sink his teeth into, and not some weak shit he can sleepwalk through.

Jason Cabell, a former DEA agent, wrote and directed the film based on his own experiences. The story centers on two drug traffickers, The Cook (Cage) and The Man (Fishburne) who make a dangerous journey to audit a cartel’s supply chain, which may have been compromised. Along the way, they encounter other oddly-named characters such as The Boss, Agent in Charge, the Snitch, and the Executioner. Almost sounds like it should be in a comic book.

I like the look of this, though. Cabell seems to have an identifiable style, which is more than can be said for many of the directors Cage has worked with lately. Color me optimistic.

SYNOPSIS: When a cocaine shipment is compromised to the dismay of a drug cartel’s CEO, known simply as The Boss, he orders his most trusted henchman, The Cook, and his partner, another master drug trafficker known as The Man, on a dangerous journey to audit the company’s supply chain. As the drugs make their perilous trek across international borders, past gangsters, refiners, and couriers, they are also being tracked by Federal Agents. When The Cook realizes where the network is breaking down, it may be too late to keep the cartel satisfied.

Running with the Devil hits theaters and VOD on September 20th.