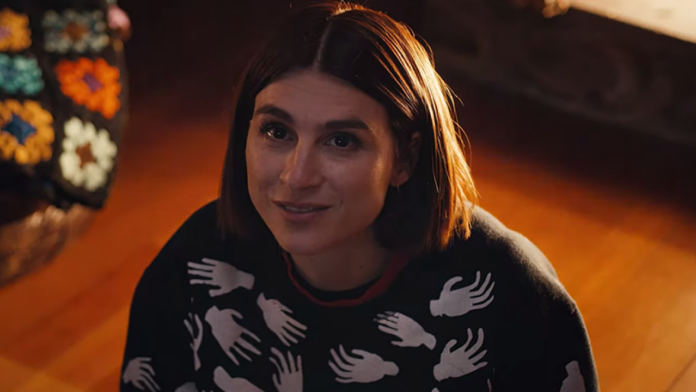 Some people are just naturally funny. You can’t really fake it. The same goes for being scary. You either have the knack to think up things that frighten the pants off of people or you don’t, and when it comes to writers…well, not everyone can be Stephen King. For those who dare to try and be something they’re not, being confronted by the real thing can be terrifying in and of itself. And that is, sorta, the premise behind the dark comedy Scare Me, which had a ton of buzz out of Sundance.

Written, directed, produced, and starring College Humor vet Josh Ruben, Scare Me finds him paired up with Aya Cash. She’s best known for her role on FX’s You’re the Worst, as well as her new gig as Stormfront on The Boys.  Ruben stars as Fred, a struggling horror author who encounters bestselling author Fanny, who challenges him to a night of trying to scare the crap out of one another with bone-chilling stories. It goes wildly out of control.

The rest of the cast includes SNL‘s Chris Redd and Rebecca Drysdale of The Meddler.

Scare Me will be a Shudder exclusive beginning October 13th.

SYNOPSIS: Fred (Josh Ruben, CollegeHumor), a frustrated copywriter, checks into a winter cabin to start his first novel. While jogging in the nearby woods, he meets Fanny (Aya Cash, “You’re The Worst” “The Boys”), a successful and smug young horror author who fuels his insecurities. During a power outage, Fanny challenges Fred to tell a scary story. As a storm sets in, they pass the time spinning spooky tales fueled by the tensions between them, and Fred is forced to confront his ultimate fear: Fanny is the better storyteller. The stakes are raised when they’re visited by a horror fan (Chris Redd, “Saturday Night Live”) who delivers levity (and a pizza) to the proceedings.

Review: ‘We Broke Up’