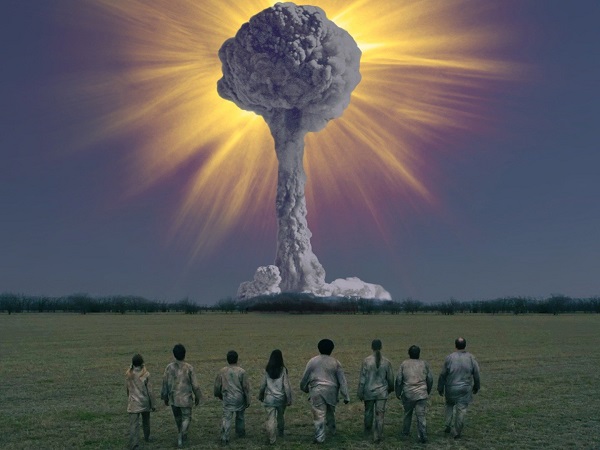 As we enter month 100 of being locked down due to Covid, you can’t help but have a feeling of dread, despair, and hopelessness. Hell, just watch the cable news for more than 10 minutes and it’ll be hard to feel optimistic about… well anything. It’s almost ironic that director Steve Collins’ third feature film I’ve Got Issues, tries to explore the anxiety, dread, hopelessness, and despair of everyday life, but with a surreal comedic twist.

I’m still trying to wrap my head around I’ve Got Issues. The film prides itself as a surreal comedy that takes a look at our everyday boring, uneventful and despairing everyday life, but unfortunately, the film fails to really land at… well, anything. First off, there’s no overall narrative plot. Instead, it operates as a series of small sketches about various characters as they try and cope with the craziness of their everyday monotonous life. While some of the characters from “story A” interact with others from “story B” and so forth, there’s no real story seamlessly moving through the film. Complete with title cards every few minutes for the new “sketch,” it feels more like an experimental student film than a feature-length movie.

Speaking of the “comedy,” unfortunately, it doesn’t land. I’m not obtuse, but I can recall laughing perhaps 5 times through the hour and 33-minute movie as I’ve Got Issues simply doesn’t land in the jokes. A guy getting his keys locked in the car, another guy applying for an internship with the KKK (but they recycle), and a self-help guru who really sucks at his job are just a few examples of misfires I’ve Got Issues has. The few moments that work consist of a sarcastic newscaster various characters see when they turn on the news, as well as a white guy who meets and gains a “black friend” via a dream, and proceeds to try and be friends with black people he meets on the bus, which was incredibly and awkwardly funny. But the rest, just doesn’t really work. The comedy aspect of I’ve Got Issues is supposed to be the drawing part (why else spend the money to have comedian Jim Gaffigan play the narrator of the movie), but if that doesn’t work, then the film falls flat as a series of scenes about broken people trying to cumbersomely be cumbersomely funny, which is exactly what it does.

That doesn’t mean that I’ve Got Issues is a complete misfire. About halfway through the film, a few of the stories find a way to connect storylines and deeply broken people manage to find a way to help each other from their despair unknowingly. Ultimately the finale of the film tries to wrap everything in a neat bow to show that people together can dope with their issues. While it’s a great overall message, it needed some tighter writing to blend it all together in the way director/screenwriter Steve Collins intended.

I’ve Got Issues is currently streaming on VOD.