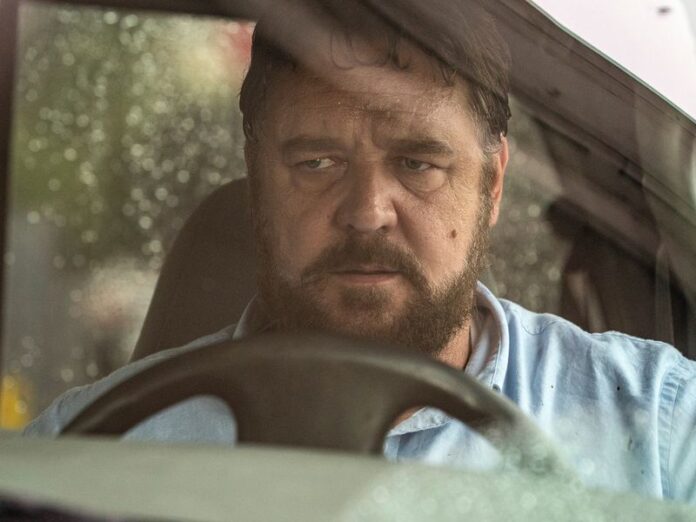 The psychotic road rage thriller Unhinged will be remembered for two things if anything at all. First is that it’s the biggest major release to hit theaters first during the pandemic. Second: Russell Crowe’s overpowering, sweaty, off-the-handle performance is the kind of blatant overacting only a star of his caliber is allowed to get away with, and pretty much the only reason to plunk down your money. Are you not entertained? Yes, Maximus, I am entertained. Just barely.

Any pretense of deeper meaning in this latest aggrieved white man thriller is thrown out the window early and never returns. Crowe, looking like one of the hulking mob bruisers from The Sopranos, plays Tom Cooper, and the first we see of him is the committing of a double-homicide. After murdering who appears to be his ex-wife and her new lover, he torches the place and drives off. The fire is significant; he’s not trying to hide. He’s calling attention to himself.

Carl Ellsworth’s screenplay probably could’ve left this part out, or let it simmer for later to explain Tom’s murderous actions. Instead, it removes any complexity, any mystery from his encounter with hurried mom Rachel, played by Caren Pistorius. Rachel’s having a tough go of it as a single parent with a shaky job and her self-destructive tendency to be late to everything. Stuck in traffic with her wise-beyond-his-years son Kyle (Gabriel Bateman), the jackass in the truck ahead of her won’t move when the light is green. She’s in no mood. Laying on the horn a bit too much, she zips past the man only to find that he’s right next to her moments later, and he wants an apology. Where was his “courtesy tap”?

“We seem to have developed a fundamental inability to apologize to anyone for anything”, he grumbles.

He’ll go to homicidal lengths to get that apology from her. More than that, he wants her to experience what REALLY having a bad day is like. Everyone she comes in contact with, friends, family, complete strangers at the gas station, become his bloody victims. “Let’s play Russian Roulette with your contacts”, Tom roars, taking control of Rachel’s life like the unseen madman from Steven Spielberg’s Duel.

Director Derrick Borte, who I interviewed years ago for his excellently insightful debut The Joneses, has Tom stack up the body count like cordwood. The discretion shown in the prologue is absent during his rampage. But there’s simply not much else going on here. While a couple of the chase sequences are intense, there’s nothing that compares to the dark energy emanating from Crowe in this flick. He looms like a deadly spectre in every scene, the best in which Tom sits face-to-face with an unsuspecting lawyer friend (Jimmi Simpson) of Rachel’s. Little does he know that Tom isn’t the “old friend” he claims to be, and that he’s got particular hate for divorce attorneys.

That little nugget of info about Tom would’ve been the perfect time to unveil the truth of his murderous past, as it would’ve shown us exactly how far this maniac is willing to go. Instead, we already knew too much and what happens next is never really in doubt. It doesn’t take away from the effectiveness of Crowe, who is convincing as someone who is ready to inflict the same damage on others that life has dealt to him. Or at least, that’s how he sees it in his own mind. Whether it’s true or not doesn’t matter to guys like Tom, and what makes him scary is that they exist in the world.

Ultimately, I’m not sure we want Unhinged to be another Falling Down or Changing Lanes. Again, the thing we’re going to remember most is its placement in the world, and for the first movie back in theaters Russell Crowe goes so far outside the lines that boredom isn’t an option.