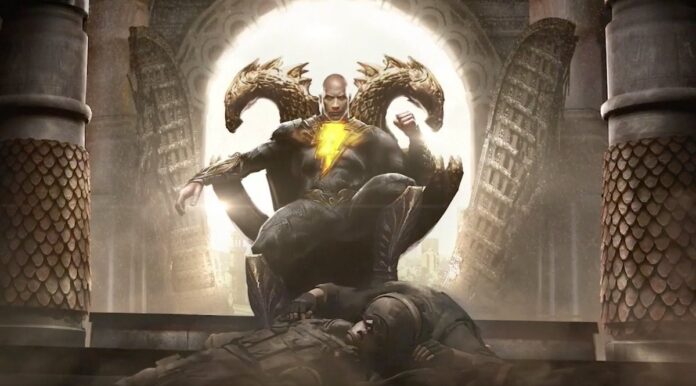 “The hierarchy of power in the DC universe is about to change,” Dwayne  Johnson promised at DC Fandome’s Black Adam panel this afternoon. A movie version of “One of the most powerful villains, antiheroes in the DC universe,” has been in the works for a while, Johnson noting his 10-year journey trying to bring the comic-book character to the big screen.

The Rock himself revealed the first teaser for Black Adam during #DCFanDome in a collaboration with @Bosslogic. pic.twitter.com/BilyeuyueQ

With not one but two proof of concepts, Johnson answered a few questions between the videos before talking a bit with Noah Centineo. The To All the Boys I’ve Loved Before star was announced to play Atom Smasher back in July. Atom Smasher is part of The Justice Society of America, a group that Johnson confirmed would be an integral part of the upcoming film. Hawkman, Dr. Fate, and Cyclone will join Atom Smasher and Black Adam in the fight for justice. As Johnson said, Black Adam goes after what he wants and what he deems important, the way he wants to do it. So it’s likely the JSA and Black Adam won’t get along. “Welcome to truth, justice, and the Black Adam way.”