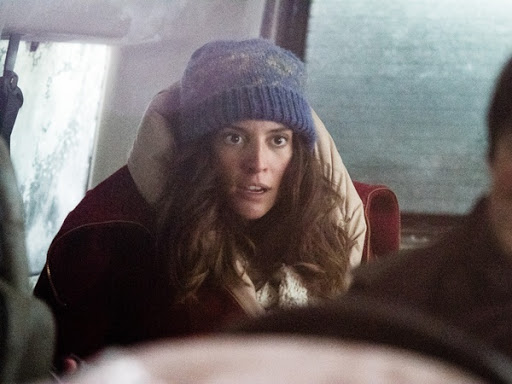 Those of us who live in cities where heavy winter storms are a common thing have likely been stuck in the snow a time or two. Maybe you got out and pushed the car, or shoveled your way out. But what if that were simply impossible? What if you woke up in your car after the mother of all blizzards, buried under so much snow your vehicle had become like a tomb? That’s the dilemma facing Genesis Rodriguez’s character, Naomi, in the claustrophobic thriller Centigrade. Starring alongside her real-life partner Vincent Piazza, Rodriguez is pushed to the limits in a physically and emotionally challenging role unlike anything she’s done.

I’ve been a big fan of Rodriguez since 2012’s Man On a Ledge and the Will Ferrell telenovela comedy Casa de mi Padre. She also voices the role of Honey Lemon in both the Big Hero 6 movie and TV series. But Centigrade isn’t nearly as light-hearted. Director Brendan Walsh put his stars through the wringer and the frigid temperatures to recreate the experience of being trapped in freezing conditions. Not only that, but since the characters deteriorate over time, Rodriguez had to prepare herself for making that believable on screen.

A few days ago I was lucky enough to talk with Genesis Rodriguez about the making of Centigrade, what she and Piazza put themselves through for the film, and much more. You can check out my interview with her below and review here. The film opens tomorrow, August 28th.

Cinema Royale: Why ‘Thor: Love And Thunder’ Could Be A Polarizing Film For Marvel (Special Guest: Joblo.com’s Chris Bumbray)