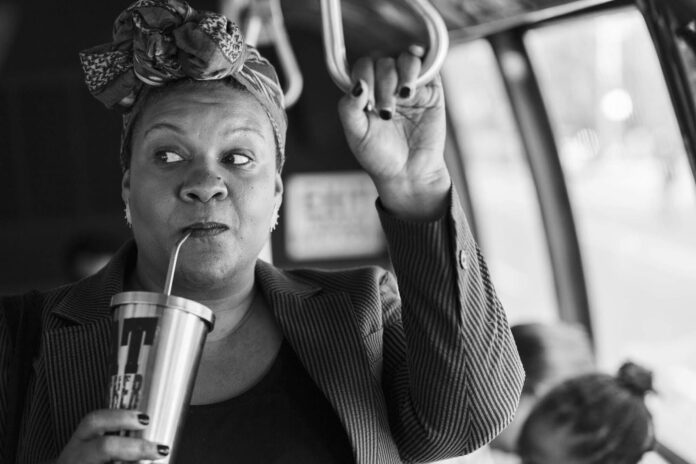 If there was a breakout star of this year’s Sundance Film Festival, undoubtedly it was Radha Blank. The writer/director took Park City by storm with her debut feature, The 40-Year-Old Version, hilarious comedy which earned her the Directing award and a quick purchase by the folks at Netflix, who are finally ready to unleash Radha Blank on the rest of the world. Be prepared.

So what had everyone buzzing about this movie and the big breakout of Radha Blank? In The 40-Year-Old Version she plays a less-successful version of herself, a struggling playwright in her 40s, a black playwright at that, concerned that she’ll never live up to the promise of her early career. The film follows her as she deals with being an unappreciated drama teacher (and the horny kids lusting after her), a black writer in a predominantly white field, prejudice within the industry, and her own self-doubt. So she does what anybody would do in that situation and reinvents herself as a middle-aged rapper.

I saw the film at Sundance and it didn’t impress me on the same level it did others. However, I also noted that Blank is a future star with a voice we’re going to be hearing for a long time. She’s since gone on to write on shows such as Empire and She’s Gotta Have It.

SYNOPSIS: Radha, a down-on-her-luck NY playwright, is desperate for a breakthrough before 40. But when she foils what seems like her last shot at success, she’s left with no choice but to reinvent herself as rapper RadhaMUSPrime. The Forty-Year-Old Version follows Radha as she vacillates between the worlds of Hip Hop and theater on a quest to find her true voice.

Sundance: ‘Minari’, ‘Boys State’, ‘Crip Camp’ Awarded As The Best Of The Fest