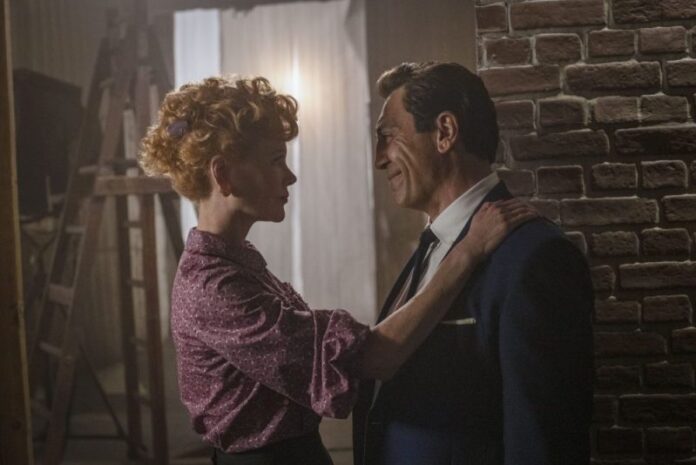 An Aaron Sorkin screenplay is never about just one thing. The Social Network wasn’t just about the formation of Facebook, was it? And neither is Being the Ricardos just about comedy legends Lucille Ball (Nicole Kidman) and Desi Arnaz (Javier Bardem) surviving a particularly hectic week of filming on I Love Lucy. There’s a lot going on here, such as McCarthyism, sexism, and even a personal scandal that threatens the duo’s rocky marriage. When Sorkin’s snappy dialogue is put to those things in context of the 1950s era of Hollywood, the film soars. But if you were looking for a film that bolsters Lucille Ball’s tremendous talent as one of the funniest women ever to grace the screen, well, you might have to look elsewhere.

There’s no such thing as a straight narrative with Sorkin, and so Being the Ricardos unfolds in daily segments, from the table read all the way to the live filming of the “Fred and Ethel Fight” episode of I Love Lucy. It’s actually quite a clever idea if left on its own. However, Sorkin complicates it by hopping around to different timelines, narrated by two writers and the showrunner Madelyn Pugh (Linda Lavin/Alia Shawkat), Bob Carroll (Ronny Cox/Jake Lacy), and Jess Oppenheimer (John Rubinstein/Tony Hale) as they fill us in on details of Lucy and Desi’s relationship at various stages. But the framing is weird, nebulous in its time setting, and doesn’t examine anyting particularly important.

Being the Ricardos is better when Sorkin keeps it simple. Lucy, with her mop of fire red hair, and her suave Cuban band leader husband Desi, are up to their eyeballs in tabloid scandal. They’re being targeted in a couple of different ways: an accusation that she is a Communist, making her a target of McCarthy’s witch hunt; and there’s also the newspapers buzzing with Desi’s apparent infidelity, which he vehemently denies. But the real turmoil happens on set, where co-stars Vivian Vance (Nina Arianda) and William Frawley (J.K. Simmons) can’t stop sniping at one another long enough to do a scene, the writers are no better, and there’s a power struggle between Desi and the other execs.

As a huge fan of Sorkin’s other examinations of TV show chaos, Sports Night and Studio 60 On the Sunset Strip, I found the best aspects of Being the Ricardos were when he leans into what he knows best. The dialogue is zippy, and Sorkin is a pro at weaving in larger themes into seemingly ordinary conversation. Sexist treatment of successful women like Lucille and Vivian hampers their ability to make the show the best it can be. Arianda is particular good as Vivian, a gorgeous, respected actress who hates being cast as the very-domesticated Ethel Mertz. She struggles to stand out in Lucille’s shadow, made worse by Frawley’s constant harassment about her lack of talent. Simmons is terrific as the grumpy, seen-it-all-before Frawley, who has a moment of openness in defense of Lucille who he sincerely respects.

While there has been a lot of debate on the casting of Kidman and Bardem, neither is out of their league here. Kidman has a lot to juggle, too much given the amount Sorkin heaps into this story, but she plays both the screwball sitcom Lucy or the tough-as-nails Lucille. Also effectively done are black-and-white recreations of some of the show’s iconic moments, such as the grape stomping scene. Sorkin envisions these moments as emerging straight from Lucille’s creative mind, a testament to her ability to see funny. If only the script were itself funny, and Lucille presented as a woman whose humor was an integral part of her character. Instead, she comes across too often as a stick in the mud whose sense of humor is used against her by others. Bardem won’t convince anybody that he’s got a hint of Desi Arnaz’s charisma, but he’s not distracting in the role, either. The same can’t be said for Kidman’s prosthetics which take some getting used to.

The biggest hindrance to Being the Ricardos is a surprising lack of narrative focus and a serious lack of spark. Sorkin has so much on his mind that the film ends up being about nothing at all, when there’s more than enough in the fictionalized mayhem behind the scenes of a comedy classic.

Being the Ricardos opens in theaters on December 10th, followed by Amazon Prime Video on December 21st.