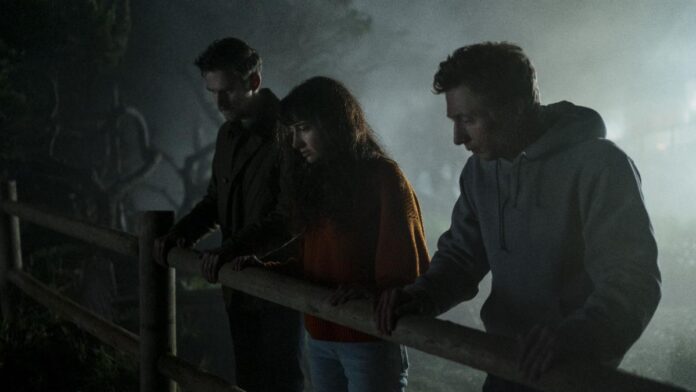 Imagine this: two couples in tangled, troubled relationships; a getaway weekend of rest and relaxation in a beachside home; a mysterious caretaker. A setup like this absolutely screams formulaic vacation horror, and certainly Dave Franco’s directorial debut The Rental plays into those expectations. But over the course of 90-minutes, Franco’s film slashes and burns into many of those familiar tropes, when he isn’t giving into them. The result is impressive if an uneven start to Franco’s directing career. It took his brother James more than a decade to make a movie half as competent.

Franco directs from a script he co-wrote with Joe Swanberg, one of the original “mumblecore” practitioners, and The Rental feels like one of those talk-heavy indies. In fact, it pretty much is, only with a malevolent twist. Basically a four-hander, the film is an exploration of how lies, privilege, lust, and secrecy can decimate a relationship, both familial and romantic. Dan Stevens is Charlie, a successful, if slightly arrogant tech wiz who gets along a little too well with his business partner, the sexy and brilliant Mina, played by Sheila Vand. Alison Brie is Charlie’s somewhat bland yet faithful wife Michelle, who says she isn’t upset by his closeness to Mina. Besides, Mina is dating Charlie’s slacker but well-meaning bro, Josh, played by Jeremy Allen White.

I’ve always said that my favorite movies involve simply putting a group of people in a room and letting their personalities bounce wildly against the walls. The Rental starts out this way, a potboiler of tension in which everybody is just a little bit out of sync. They can’t seem to get on the same page about anything; when to take walks alongside the Pacific, when to eat, when to do the illicit drugs they brought for a night of fun. And of course, there’s the undercurrent of secrecy, with Charlie and Mina appearing to be just a little too close for their own good.

Into this mix is the vacation home’s caretaker, a crusty sort (played by Toby Huss, forever of Pete & Pete) who might be a racist who denied renting the place out to Mina, an Iranian-American. He’s uncommonly good at stoking fires between them that he shouldn’t know even exist…oh, and he might be spying on them. Or it could all be one gigantic misunderstanding. Franco teases the mystery then leaves it to settle, effectively keeping it out of view but never out of mind.

While the bulk of his acting career has ventured towards the comedic, Franco shows that his directorial influence sways towards Joe Swanberg, Andrew Bujalski, and others who favor subtle jabs of humor in conversational, naturalistic tone. Franco also makes the most of the gorgeous scenery, and I’m not just referring to the locale which appropriately looks like it should be splashed across the Airbnb homepage.  There’s no angle in which Franco’s cast is ever going to make him look bad, and they aren’t bad at playing people who all have multiple layers of deception at play.

Franco gets so much from the paranoia of cheating couples and peeping toms that it’s almost unfortunate when The Rental shifts into formulaic thriller territory. There were no easy solutions to the romantic entanglements Franco and Swanberg weaved, but the introduction of a homicidal maniac is a simple form of distraction and, ultimately, a cop out that does the film a disservice.

The Rental review pics
1 of 5