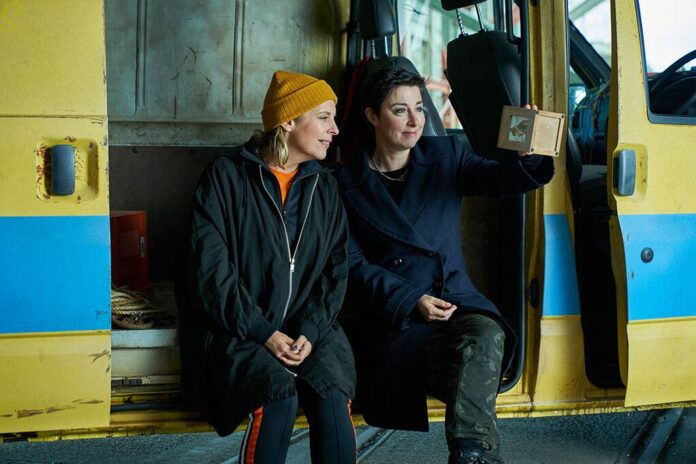 From The Great British Bake Show to…paid assassins? Beloved comedy duo Mel and Sue (Sue Perkins and Mel Giedroyc) star in the upcoming Peacock original series, Hitmen, in which their targets are very different than contestants on the wildly popular baking show.

Giedroyc and Perkins play best friends Jamie and Fran, who try to juggle their messy lives while also doubling as hired assassins. In the trailer, we see the BFFs arguing over one’s birthday while holding one of their targets in the back of a truck. Bullets fly, as do the laughs and grievances, as they encounter all sorts of colorful and costumed characters. They’d much prefer a clean kill and don’t really take to all that torture stuff.

Behind the series are writers/exec-producers Joe Markham and Joe Parham. Also in the cast are Jason Watkins, Fleabag‘s Sian Clifford, and Asim Chaundry.

SYNOPSIS: Best friends Jamie (Mel Giedroyc) and Fran (Sue Perkins) are trying to make their way in the world with only each other to rely on. They also just happen to kill people for a living. Fueled by their antics and frivolous bickering, each job inevitably gets derailed, leading them into bizarre misadventures, full of oddball characters and unexpected dilemmas.