After 44 years, 13 films, 3 timelines, and countless bodies left in the wake it is finally time that Halloween Ends. Now, I’m not gullible to believe that this will actually be the last time we see Michael Myers on screen, that Shatner mask wearing bastard knows how to fill seats so rest assured he’ll be back. That all being said, we know for sure that this will, at a minimum, be the last film of David Gordon Green’s trilogy and by the time the credits roll there is no mistaking that. 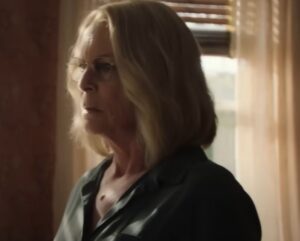 Halloween Ends picks up 4 years after the events of Halloween Kills which, by way of reminder, ended very bloody. Laurie Strode (Jamie Lee Curtis) is living with her (now) orphaned granddaughter Allyson (Andi Matichak) and trying to live some semblance of a normal life. Of course, her way of getting Michael out of her life is by getting him deep into her head by way of writing a memoir…I guess I can see the mental health benefit to processing all of that and getting it on paper. Now, this is all an amazing victory for the two of them to move on with their lives after suffering so much trauma but there’s just one problem, Myers disappeared at the end of the last film and hasn’t been seen since. Enter Corey Cunningham (Rohan Campbell) another trauma survivor (though not the knife wielding psycho kind) who falls into Lori and Allyson’s orbit…then into the orbit of another tall imposing shape of a character. 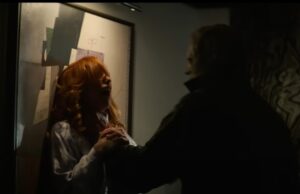 So that last bit there….this is where the movie is going to lose alot of people. If there’s one thing I know it’s that audiences (despite what they may say) don’t like being surprised. If they buy a ticket for Laurie Strode V Michael Myers, they’re going to want to see at least 80% of the film showcasing just that. David Gordon Green made a very perplexing decision and decided for this last film in this 44 year old franchise he should ditch the story we’re all so familiar with and pull in some new person take center stage. Imagine going to see the new Scooby-Doo movie only to find out that Scoob takes a back seat to Huckleberry Hound for a good chunk of the flick. I get that there’s a need (or want really) to subvert expectations but when you’re dealing with a beloved property you have to be VERY careful which of those expectations you decide to subvert. It’s the same as how people reacted to Rian Johnson’s The Last Jedi, those that went and found out he changed the very aspects they came to see had no chance of being happy with the end result.

I’m not going to sit here and tell you that Halloween Ends is a total disappointment and entirely unwatchable, it’s not. Once you get past the jarring change in focus your left with a really good slasher flick with some real philosophical undertones. The kills are unique, gory and a’plenty with some familiarity thrown in for fans (Myer’s whole “Pin you to a wall with a knife then look at you with a tilted head like a dog” does make an appearance). Most importantly though the last 20 odd minutes do come through to deliver the final fight you came to see. The visceral, raw, hatred demonstrated in this fight is of the type that it could only have been pulled off by an actor of Curtis’s caliber. The action is optically stimulating while mentally supplying the vibes you would expect from an almost half a century in the making grudge match. Lastly it delivers the MOST important thing, a complete lack of doubt that, for Michael Myers Halloween Ends.

Halloween Ends is available to stream on Peacock as well as in theaters, so if you’re unsure you always have the free option. All of my earlier gripes aside, this is an excellent film for a date night in mid-October. The key point is understanding going into the movie that you’re not going to get exactly what you are expecting. Equipped with that knowledge, I think you’ll find a horror film that more then merit’s your $14 ticket cost.

This is Laurie Strode’s last stand.

After 45 years, the most acclaimed, revered horror franchise in film history reaches its epic, terrifying conclusion as Laurie Strode faces off for the last time against the embodiment of evil, Michael Myers, in a final confrontation unlike any captured on-screen before. Only one of them will survive. Icon Jamie Lee Curtis returns for the last time as Laurie Strode, horror’s first “final girl” and the role that launched Curtis’ career. Curtis has portrayed Laurie for more than four decades now, one of the longest actor-character pairings in cinema history. When the franchise relaunched in 2018, Halloween shattered box office records, becoming the franchise’s highest-grossing chapter and set a new record for the biggest opening weekend for a horror film starring a woman. Four years after the events of last year’s Halloween Kills, Laurie is living with her granddaughter Allyson (Andi Matichak) and is finishing writing her memoir. Michael Myers hasn’t been seen since. Laurie, after allowing the specter of Michael to determine and drive her reality for decades, has decided to liberate herself from fear and rage and embrace life. But when a young man, Corey Cunningham (Rohan Campbell; The Hardy Boys, Virgin River), is accused of killing a boy he was babysitting, it ignites a cascade of violence and terror that will force Laurie to finally confront the evil she can’t control, once and for all.