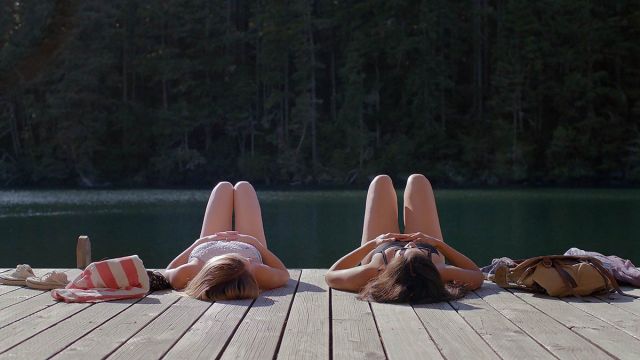 There’s nothing quite so unsettling, as world-altering, as coming to a place you consider home and finding the locks changed. It throws a person off-balance, and in Lara Jean Gallagher’s mildly salacious lesbian drama Clementine sends one woman hurtling into a dangerous liaison with a much younger woman. But don’t get too jazzed for anything as steamy as the plot suggests; this one delivers more teases than actual payoffs.

Gallagher starts us off with a calming moment, a romantic wake-up call of sweet-nothings whispered in the ear of Karen (Otmara Marrero) by her lover, D. The older woman coos, “You’re so young. You’re going to break my heart”, but then Gallagher thrusts us forward in time and that is definitely not what happened.

Karen is left reeling after a bad breakup, one initiated by D, and decides to take the passive-aggressive route to vengeance by breaking into D’s lakehouse and making herself at home. Gallagher effectively plays into the temporary insanity that comes with a traumatic split, with Karen taking out her petty grievances in every way she can think of. When she finds the door to the lakehouse is locked, she breaks the windows to get in, tries to reclaim their pet dog, and basically makes herself a silent nuisance. Get some sun, swim in the lake, eat all of D’s food, sleep in the big bed. 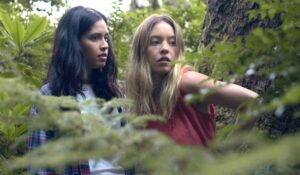 There’s temptation everywhere for Karen. The temptation to do real damage to D, or to herself. And then, suddenly, the temptation of Lana (The Handmaid Tale‘s Sydney Sweeney), a mysterious, seductive girl who says she’s 19 but…is she really? The confidence she carries is seductive, but her Hollywood dreams of being an actress? Naive, immature at best. She says a number of things that sound like lies, but turn out to be true. Karen’s smart enough to recognize something isn’t right about her, but the temptation…

Clementine is all about shifting power dynamics among women who are exploring their sexuality. Karen knows who she is, but she’s keen on finding out what it’s like to be the older woman in a relationship for once. While D is very rarely seen, her presence looms over the entire film. She knows where Karen is, and delights in keeping tabs on her with incendiary phone calls. D pushes Karen to take risks she perhaps wouldn’t have, like with a girl she maybe just met?

But who is zoomin’ who here? Karen regards Lana with curiosity like she’s a novelty to be played with. And Lana…well, she’s telling strangely unerotic stories about clementines, while playing with a clementine, then tossing said clementine into the lake uneaten. It’s all a bit weird and unsubtle, like someone writing about something they’ve heard about from but never experienced for themselves. The relationship between Karen and Lana, whatever it may be, works better as a game of cat and mouse. The actresses, both excellent but with extra nods to Sweeney, keep their emotions at bay like con-artists running a shell game.