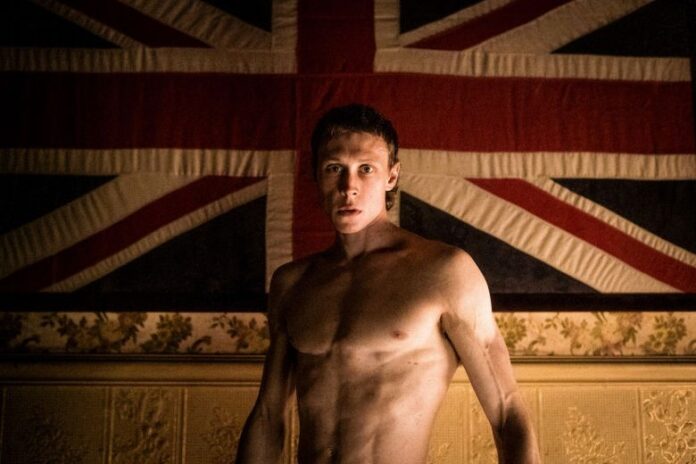 True History Of The Kelly Gang tells the tale of Ned Kelly (George MacKay) and his band of outlaws in Australia in the late 1800s. From an early age Ned (Orlando Schwerdt) had the deck stacked against him. The Kelly’s are a poor family that don’t have the best reputation. Ned’s mother Ellen (Essie Davis) resorts to prostitution to get food on the table for Ned and his handful of siblings. Ned’s father John is in and out of the picture, leaving at times and in jail at others.

One of the local officers, Sergeant O’Neil (Charlie Hunnam), takes a particular interest in Ellen. O’Neill ends up arresting John, who winds up dead in his prison cell. This is a huge blow to a family already teetering on the edge. Ellen ends up selling Ned to Harry Power (Russell Crowe), an infamous bushranger. Ellen wants Ned to learn from Harry and become a “big man” and to “go out there and show the world.” 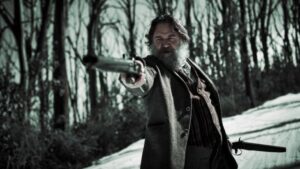 Harry would go on to plant the seed of criminality in Ned. A seed that would grow to shape the rest of Ned’s life. Almost immediately Harry murders men in front of Ned and then brings Ned to exact his revenge on O’Neil. The inner turmoil in Ned is apparent, but eventually Henry’s teachings take over and Ned becomes a full-fledged outlaw.

As an adult, Ned seems to not have any fear. From bare knuckle boxing to brazenly running into the open to shoot enemies during a gunfight, nothing phases Ned. Eventually, Ned learns that his father was a member of the Sons of Sieve. This group is known for striking fear into their enemies all while crossdressing. Ned embraces his lineage and recruits men into his gang to try and make their mark against British oppression. As Ned begins losing his grip on his sanity, a massive attack on the British goes from a plan to an obsession. 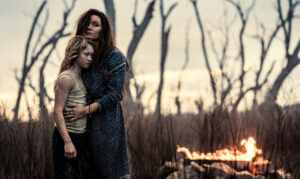 True History Of The Kelly Gang is based off Peter Carey’s novel and directed by Justin Kurzel with Shaun Grant writing the screenplay. Kurzel does a great job highlighting the barren and desolate badlands of Ned’s childhood. The entire film is cast in dreary grays and drab colors, nothing bright or happy. Ned lived a cold and miserable life and the settings throughout the film aptly reflect that.

One of Kurzel’s main focuses is on the disorientation of battle. From employing numerous uses of shaky cam, to deafening noises and blinding lights, Kurzel really transports the audience into the middle of the fight scenes. While effective, it may be a little too much – at times even nauseating. It does give a unique feel to the film and leaves an impression. 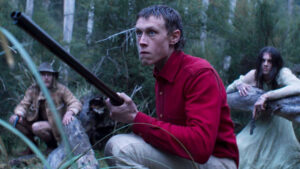 However, the film truly struggles in providing a cohesive narrative. There are moments where it seems disjointed and clunky. Scenes will start with confusion on how the characters went from the last scene to the next. The acting is strong by most of the cast, with George MacKay shining as Ned. MacKay perfectly captures Ned’s instabilities and, at times, insanity.

True History Of The Kelly Gang is far from perfect, but it does have interesting moments and artistic elements. There is a punk rock feel to certain parts of the film – especially the scenes around Ned’s transition. The budget is clearly thin at points, with certain battles really needing more production value. Some of the deaths looking as fake as they did were hard on the eyes and took away from the atmosphere the film was trying to create.

The lasting appeal of the film will be through the visuals. From the badlands of Australia to the rhythmic cult like rituals, and finally the battles – the film is chock-full of images that are burned into my memory. True History Of The Kelly Gang will not be for everyone, but a select few will really enjoy what Kurzel created. For the vast majority, there are probably better options out there and True History Of The Kelly Gang is one to pass on.