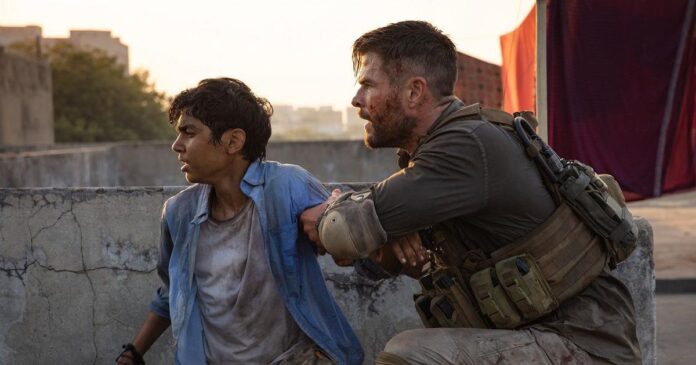 During Netflix’s rapid ascent to the top of Hollywood’s power structure, they’ve managed to corner the market on many different things: teen rom-coms, prestige TV, and more. But one area where they’ve been lagging is in the true blockbuster action franchise.  Extraction, the explosive action flick from Marvel directors the Russo Brothers and their longtime stunt coordinator Sam Hargrave may be what they’re looking for, as it proves to be a straight-forward, if silly role for Chris Hemsworth to chew on and spit out.

To enjoy Extraction and see it as more than just a dumb-headed “merc on a mission” movie, one has to be willing to accept the goofy zen warrior bullcrap of Hemsworth’s troubled ex-soldier, Tyler Rake. No, really. That’s his name. When we’re first introduced to him he’s being shot in the back during a dangerous operation. Some time later, we see him waking up from a drunken stupor, from which he immediately walks over to a high ledge and dives from the top of a waterfall. Why? So he can meditate at the bottom of the lake, cross-legged like a victorious Dhalsim or the Mahatma. You expect Keanu Reeves to do some shit like that, but Hemsworth?

From that moment on it’s pretty clear that Extraction, for all of its bullets and blood and death, of which there is quite a lot, is going at this with tongue firmly in cheek. That said, the generic nature of the plot and grim screenplay hamper efforts for it to be more fun than it is. Rake is hired by a former flame (the excellent and underrated Golshifteh Farahani) to rescue Ovi (Rudhraksh Jaiswal), the kidnapped son of an imprisoned drug lord in Bangladesh. The op is complicated by Saju (Bollywood actor Randeep Hooda), an ex-special forces guy who seeks to make the rescue himself to impress the boss. Oh yeah, and the streets of Dhaka are teeming with armed goons itching to put a bullet in the good-looking American dude who looks like that guy from those Avengers movies.

Hargrave makes his directorial debut here, and it’s clear where his influences come from. He’s straight from the Russo Brothers/Gareth Evans school of barely-controlled chaos, which makes for some wildly thrilling and gory sequences. Blunt edges and sharp objects find plenty of flesh to rip into, with our hero at the business end of some of it himself. Tyler’s rescue of Ovi comes after the merc has littered the streets with freshly-minted corpses, before bursting into the enemy hideout for some brutal fisticuffs.

While the stuntwork and fight choreography are incredible, the script is bare-bones and pretty dumb, while some of the acting leaves much to be desired. Hemsworth is…well, he’s fine. Obviously, he can more than handle the role’s physicality, bringing a tough-guy machismo like genre stars from the ’80s used to. Thankfully, Hemsworth isn’t asked to say too much,  because when he does, like during a somber, melodramatic breakdown between Tyler and Ovi, it’s laughably insincere. I also don’t know why Stranger Things and Black Widow actor David Harbour was here. His role, small as it was, could’ve been done by anybody and it seemed like Harbour knew it, too.

Extraction has mid-budget franchise written all over it, though. I could’ve easily seen this performing well in theaters, and that’s exactly the kind of movie Netflix needs more of. Hemsworth has a spotty track record outside of Marvel (although Blackhat and Bad Times At the El Royale are pretty great), but he may have found himself another role to sink into for the long haul.