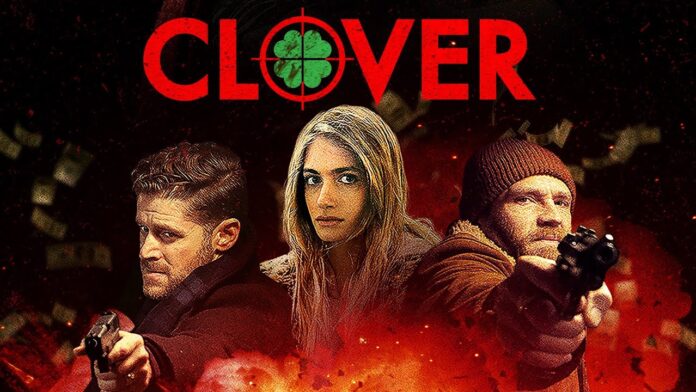 Actor/director Jon Abrahams hasn’t given himself an easy out with the mob comedy, Clover. The genre is so overstuffed with Tarantino stereotypes and cliches that creating something new is a lost art. While there are a few laughs to be had in this darkly comic caper, originality is a target that isn’t even aimed at, much less hit.

Abrahams and fellow indie stalwart Mark Webber play Irish-American brothers Mickie and Jackie. Stop me if you’ve heard this one: one brother is a hard-working, respectable sort, while the other is a total loser and epic screwup. They own a struggling bar, and made the mistake of going into hock with local tough guy mobster Tony Davolio (Chazz Palminteri playing every Chazz Palminteri role ever), and just when they have the money Jackie goes and loses it all gambling. Well, Tony wants his dough, and after a not-so-veiled threat, convinces the bumbling brothers to go out on a simple job with his son, Joey, to collect from another deadbeat. Long story short: the mark ends up dead, but also so does Joey, killed by the target’s over-eager young daughter, Clover (Nicole Elizabeth Berger).

Much of the film involves Mickie, Jackie, and Clover racing to avoid being killed by Tony’s army of goombahs. They enlist a slew of colorful associates for help, portrayed by actors who chew into their roles like a sausage stromboli. There’s Tichina Arnold as the streetwise, tough-talking club owner, Pat; a chameleonic Jake Weber as the poison-making madman Terry; and Jessica SZohr as Angie, who buries her fondness for Jackie under a tough exterior. The supporting cast are far more entertaining than the two leads, whose constant bickering wears old quick. Also a lot of fun are Erika Christensen and Julia Jones as a pair of beautiful assassins, hired by Ron Perlman as a rival mob boss who gives a terrific opening rant about the orderliness of wolves. Seriously, it might be worth the price of admission all by itself.

Unfortunately, there’s little else for Clover to hang its hat on. The action is gory but isn’t particularly inspired. It also blurs the comedic tone, making it unclear what Abrahams hopes to accomplish. Hype for the film has emphasized Clover as a potential badass herself, but that largely goes unfulfilled despite an enthusiastic performance by Berger. She’s one of the few actors who doesn’t have to shout their dialogue to get anything across, which is a nice change of pace for a movie that is too loud considering everyone is trying to be sneaky.