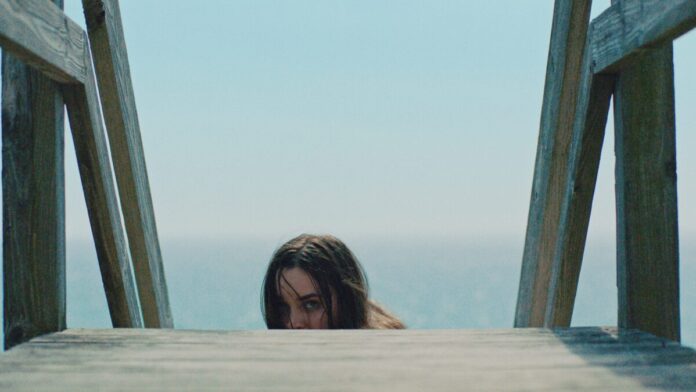 You’d think some time away from the hustle and bustle of the real world would be a good idea, right? That’s exactly what Emily (Liana Liberato) and Randall (Noah Le Gros) have in mind in The Beach House. Things have been rocky for the two of them so a romantic few days at Randall’s family’s beach house is just what the doctor ordered. Unfortunately for Emily and Randall, Mitch (Jake Weber) and his wife Jane (Maryann Nagel) crash the party. Unbeknownst to Randall, his father is old friends with Mitch and let them stay at the house. Almost immediately Jane seems off, staring into space and her eyes seeming a million miles away behind her smile. Emily also stumbles upon a plethora of pills that Jane is on, but not sure what they are for. 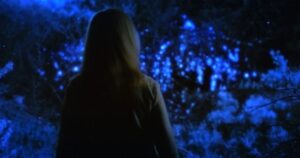 On Emily and Randall’s first night there was a beautiful, and mysterious, glow that filled the ocean and the trees. All four of them went outside to explore and were surrounded by dense fog. The fog began to become thicker, and smell worse, affecting all the members of the house. Almost immediately things start to take a turn for the worse. Not only are Emily and Randall essentially living with strangers, but everyone is feeling ill – must have been the oysters! Jane is hit the hardest and becomes incredibly sick. Emily stars to realize that something is amiss, and this is no ordinary illness…the question is, what is it? 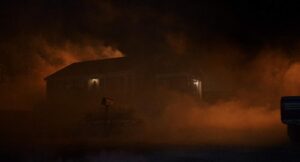 The Beach House has a lot going for it and is a very strong feature length debut for writer and director Jeffrey A. Brown. Most notably, the acting throughout the film is very good, with Liberato delivering an especially fantastic performance. Liberato carries a lot of the film forward and we get to see a wide range of emotion from her. Liberato is surely a name to keep an eye out for and performances like this one are why. She was entirely believable and helped create the atmosphere of dread throughout The Beach House. Brown lulls the audience in with the peacefulness of the beach town, before building up the terror. Water plays a big role and Brown makes sure we know it. He juxtaposes the soothing sounds of waves and wind with intense, ominous, noises and closeups of water.

Brown does a noble job with what he had to work with. The film only has a few locations and very minimal cast, but sometimes less is more. The issue is, while everything that The Beach House gives you is enjoyable, there just simply isn’t enough. The film could have benefited with an additional 20 minutes added and another chapter to the story. Without it, the audience is left largely unfulfilled. It’s admittedly a double edge sword. On one hand, the simplicity is admirable, and it isn’t full of unnecessary nonsense that takes away from the story. On the other hand, not enough happens to set The Beach House apart. There needed to be a happy medium and unfortunately The Beach House doesn’t find it. The film is enjoyable and absolutely worth a watch, but expect to be wanting more once the credits roll.

Review: ‘To The Stars’