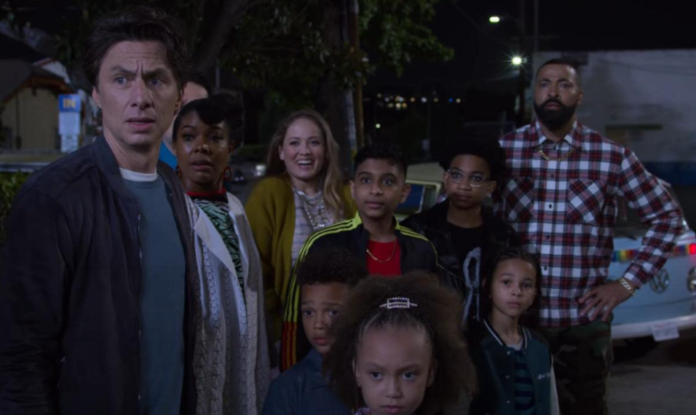 Cheaper by the Dozen is directed by well known TV producer Gail Lerner (Will & Grace, Black-ish) and is the newest film with a fresh take on the 2003 and 2005 hit family comedies of the same title starring Steve Martin and Bonnie Hunt. This all new and exclusive Disney+ film premieres today which stars Zach Braff (Scrubs) and an all around real life bad-ass mom, Gabrielle Union (10 Things I hate About You, Bring It On). Braff and Union play divorcees who found love and marriage through breakfast. This family fun comedy touches on multiple predicaments and concerns that bear serious relevance to today’s social and controversial dilemmas. Paul and Zoey Baker (Braff, Union) are a bi-racial couple with a beautifully blended family of twelve and together, they navigate through a hectic home life while simultaneously managing their mom-n-pop, family owned breakfast restaurant.

The restaurant grows in popularity as the Bakers expand from just serving breakfast in the morning to Breakfast Lunch and Breakfast Dinner. (Love the idea and would totally eat at one!) It may be a cramped living situation but everyone is happy and all seems well until Paul follows through on a thought to create his own sauce. His sauce becomes an instant success which opens more opportunities for bigger and better changes for him and what he wants for his jumbo sized family but does it really make any of them actually happy?

The first part of the film dives into Paul and Zoe’s previous marriages. Paul first met his ex, Kate (Erika Christensen, Swimfan, Parenthood) shortly after high school. They instantly fell in love, got married, and had a child right after. Life became more challenging when their second child was born and despite the slight degree of emotional separation between the two, they got by.  But the emotional separation led to actual separation when Paul and Kate adopted the orphaned child of their recently deceased best friends. The two became different people who at least agreed that, and is also noted via narration: “time to close the chapter”. Although divorced, Kate (Christensen) who’s obsessed with birds and is a bit “flighty’ herself, babysits all combined children FOR FREE, and is always awkwardly present in and around the newly blended Baker home.

Zoey (Union) met her ex, Dom Clayton (Timon Kyle Durrett, Heroes, Stuck With You) in the college they both attended. It was love at first sight that led to instant marriage and two kids. Dom (Durrett) rose to fame as an NFL player and with Zoey’s marketing degree, the two became an inseparable business power couple. But Dom’s growing success and schedule blew up, the more he pushed Zoey aside and dealt with his business affairs alone. Zoey, no longer waiting on his ass to come home, divorced Dom and moved on with her life.

Before long, Zoey and her two kids wind up at a restaurant with the hopes of eating breakfast. Her waiter informs her that it’s past 11AM and breakfast is no longer being served. Her kids are starving, only want breakfast, it’s 11 o’clock in the morning, and all she wants to do is feed her kids. Her voiced irritation with breakfast ending early sparks an unexpected conversation with her waiter, who further tosses the idea of breakfast being served all day long. The waiter, impressed with Zoey’s idea, suggests mentioning it to the restaurant owner and offers to make them breakfast. It’s Zoey’s turn to be impressed when her waiter returns to their table with what she considered to be an incredibly delicious meal. Her now flattered waiter reveals himself to be Paul Baker- the owner and it didn’t take long for the two to become business to eventual marital partners, uniting their family as one. The business and sauce prove to be a success but how long can Zoey manage raising the family alone while Paul is planning his future investments with the Sweet Valley High (yes, I used to watch this tv show but I mainly read all the books) business investing twins Melanie and Michele (Brittany and Cynthia Daniel) who only want to take over, instead of with his own family?

Cheaper by the Dozen does its best to take on the modern day blended family and although there are some great moments that highlight modern day dilemmas, it can come across as staged and also relies heavily on the children/child actors for comedic relief of typical Disney-esque spills and zingers. The casting choices are great with Braff and Union’s chemistry and features a wonderfully diverse group of talented kids. However, there are times throughout the film that are just way too good to be true which can set unrealistic expectations. Why the hell do writers think that living comfortably in a Calabasas, CA mansion on small business income by selling breakfast and sauce is believable? Sounds nice and all but really? I love the modern day blend approach but the whole film has a made-for-tv script that mirrors more of the Adam Sandler/Happy Madison comedic vibe. I mean Ron Funches cameo appearance drops in like a scene taken from Rob Schneider’s “You Can Do It” character from those Sandler’s movies. I love Funches (Powerless is still a favorite)  but it was a waste of his comedian shtick and the one scene he has isn’t even necessary. This is a cute film that has a few laughable moments and does cover/address important issues of contemporary relevance but it is quickly forgettable.  Not a wowzer for me but respectable enough to recommend watching at least once, especially with the whole family.

Cheaper by the Dozen exclusively releases on Disney+ March 18th.