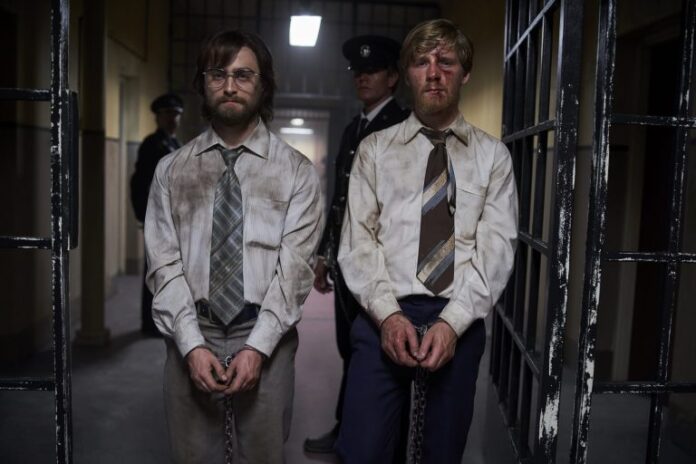 Prison escape movies are only as interesting as the escapees themselves, and the cleverness of their escape route. So it’s not surprising that Escape from Pretoria, which boasts a bearded and nervous Daniel Radcliffe as real-life anti-apartheid activist Tim Jenkin, is only half of an entertaining film.  Jenkin’s amazingly daring methods, executed in secret and under extreme pressure, are occasionally tense but not quite enough to cover for dull characterization and repetition that close off this promising drama.

In 1979 apartheid South Africa, Jenkin and his fellow activist partner Stephen Lee (Daniel Webber) do what the racist establishment deem unforgivable; they dared to launch a non-lethal leaflet bombing in the city streets. Other than a few shrieks from the white, privileged 13% who ruled the country, nobody was hurt. However, Jenkin and Lee were quickly captured and sentenced to the all-white maximum security Pretoria Prison where the racist guards are none too happy taking care of men they see as traitors to the race.

Escape from Pretoria isn’t your typical prison break flick; action is at a minimum, there are no tunnels to dig, no riots or warring gangs. The plan enacted by Jenkin is ingenious, dangerous, and risky in its execution. Using bits of stolen wood, Jenkins meticulously crafts a series of keys to open the many doors leading to their freedom on the outside. The grind of this process has nothing to do with Jenkin’s nightly key-carving routines; it’s the daily drag of prison life that is the biggest threat. The days crawl forward, and it’s easy to get swept in the minutia of it. The guards are all a-holes, and cell searches are a constant hazard, but overall the conflict is in the mind and not from an external threat.

South African filmmaker Francis Annan sheds most of the political context, a misstep considering there’s so much to explore. Jenkin was a loyal member of the ANC, the same group led by Nelson Mandela, and was rotting away in prison at the same time Mandela was held on Robben Island. Among the other inmates Jenkin encounters are other revolutionaries (led by Ian Hart as Denis Goldberg), who felt an escape could be detrimental to the movement and weren’t willing to take that kind of gamble. Overall, there’s so much attention on the details of the escape that these men, and that includes Jenkin, are under-written and flat.

That said, there are some truly gripping sequences, with tension that Annan and his cast make palpable. Radcliffe, looking slight in frame and always on the edge of a breakdown, has a tremendously nervy scene where he tries to fetch a wayward key with a piece of gum. While the details of Jenkin’s escape are noted in his book, they don’t lend themselves to being depicted cinematically which leads to a lot of repetition. A more stylish director may have been able to do something about that, but Annan’s skills are elsewhere. The claustrophobic atmosphere he creates is seen weighind down all of the men, but mostly on the crew’s third member, Leonard Fontaine (played by Mark Leonard Winter), whose torment is exacerbated by the guards’ cruel handling of his son’s annual visit. Yes, annual.

Sweat-inducing tension isn’t Escape from Pretoria‘s problem. It’s a lack of attention paid to the human drama and a disregard for the politics that caused such harsh imprisonments to happen in the first place.

Here’s The Trailer for ‘Unbreakable Kimmy Schmidt: Kimmy Vs The Reverend’ Interactive Special!